South African plants and a gravestone in Oxford 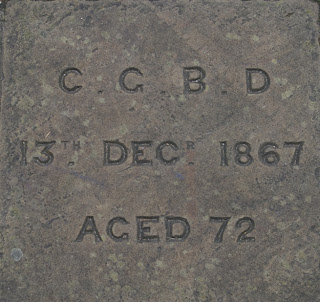 The mid-part of the day was spent at the Nerine and Amaryllid Society meeting, where the highlight was a talk by Sue Bedwell on bulbous and other summer-flowering plants of the Eastern Cape. I had to slip away mid-afternoon, however, to attend a symposium to launch the Calleva Research Centre for Evolution and Human Science at Magdalen College. This included an extremely interesting talk by Matt Ridley on the evolution of human innovation and prosperity, and three short lectures on psychological aspects of human development - not a subject I usually grapple with.

﻿ ﻿ Set in the flagstones of St John's Quad outside the chapel at Magdalen is a discrete gravestone (above). The initials are for Charles Giles Bridle Daubeny (1795-1867). Born just down the Churn Valley from here, at Stratton near Cirencester, he became one of Oxford's earliest all-round scientists, successively and consecutively Professor of Chemistry, Botany and Rural Economics. Highly respected in his lifetime, he was an early follower of Darwin, and is currently honoured in Oxford by the Daubeny Building (adjacent to the Botanic Garden) and the Daubeny Herbarium in the Department of Plant Sciences.
﻿﻿
﻿﻿Botanists and gardeners interested in South African plants know his name in the genus Daubenya (Hyacinthaceae), comprising eight low-growing bulbous plants. The first to be named was Daubenya aurea, named in Daubeny's honour in 18235 by John Lindley.  It is remarkable for its extraordinarily enlarged lower perianth segments, which flare out into a rather crown-like ring around the cluster of flowers at the centre of the plant. It comes from the rather arid and cold area known as the Roggeveld in the Karoo, and is a prized specimen for the enthusiast: this potful is cultivated by Graham Duncan in the bulb greenhouse 'behind the scenes' at Kirstenbosch. In recent years several species, formerly in other genera, have been added to Daubenya, but D. aurea is far and away the most spectacular (see the Pacific Bulb Society wiki page on the genus for more information). One has to hope that the Professor saw the plant that bears his name, but Lindley named it from cultivated material, so he possibly did.

Another Oxford connection with the monocot flora of South Africa comes in the genus Bobartia, which Linnaeus established to commmorate the two Jacob Bobarts, father and son, who were the first two superintendents of the University Botanic Garden, Bobart the Elder being appointed in 1632. A member of the Iris family, Bobartia is rather obscure, and although a species used to be cultivated in the Botanic Garden glasshouse I had never seen flowers until our recent visit to South Africa, when we found one in flower on the Groenlandberg - on a very windy day. It is possibly B. gladiata.
Posted by John Grimshaw at 22:42