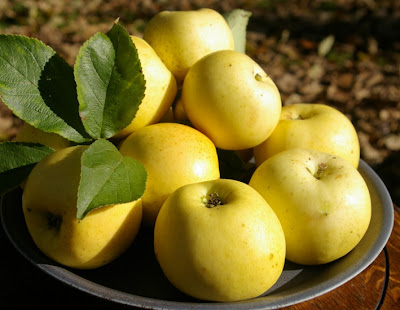 Apple 'Rose of Ciren'
The western counties of England have a rich fruit-growing heritage: Worcestershire and Herefordshire are noted for their cider production, but Gloucestershire also has a long history of tree fruit cultivation, including plums and perry pears as well as apples. As usual, most of the cultivars traditionally grown were local selections, propagated in limited numbers for planting in the vicinity and as time went by became marginalized by more productive 'standard' cultivars. Nevertheless, trees lingered on and sometimes their names have done so too, making it possible to develop collections of named local cultivars. This has been spearheaded by the enthusiasm of Charles Martell, a dairy farmer best known for inventing the cheese called Stinking Bishop, but who has developed collections of Gloucestershire cultivars of plums, perry pears and apples, and most importantly has produced an online guide to the Native Apples of Gloucestershire based on his research. It lists 185 cultivars, of which 104 are grown in the collection. The work of conserving the county's apple heritage is also supported by the Gloucestershire Orchard Group.

In the old walled garden at Colesbourne Park are a few ancient apple trees, including three of a cultivar known to the Elwes family as 'Rose of Ciren' which is what it was called by Charlie Neve, the long-standing gardener through the middle of the Twentieth Century. It is a lovely yellowish colour, sometimes with a faint pink flush, with soft white flesh, and  is aromatic with a delicious sharp flavour. It's eatable from the tree during September and October, but does not keep long when picked. Many old apples are, frankly, not very interesting to eat, but in my opinion 'Rose of Ciren' is excellent. Charles Martell came to colect propagation material a few years ago and has written it up in his text, where he says that it is critically rare and known only from the Colesbourne originals. It was said by Charlie Neve to have originated from the Royal Nursery owned by John Jefferies and Sons at Siddington, just south of Cirencester, but it would seem that it never achieved wide circulation. I plan to get some grafted this winter.

This afternoon - a glorious day followed the frost - we went out to an apple day at Oxenhall near Newent in western Gloucestershire, where there were various apple-related activities at the village hall. The Gloucestershire Orchard Group had a display of local cultivars picked from Charles Martell's orchards, making a glowing display (right) and we were able to look round the orchards of Hilter Fruit Farm, where 'Cox's Orange Pippin' and 'Golden Delicious' (living up to its name in both regards) were dripping from the trees. We came away with several large bags of apples and pears, including some of the most famous of Gloucestershire apples, 'Ashmead's Kernel', a fine crisp and flavoursome cultivar that rivals a "Cox" when at its peak. Our own young tree is doing what it can (see below) but we get through a LOT of apples. The history of this cultivar is interesting and is discussed on the GOG site: it is curious that, although well-regarded locally for a couple of centuries at least, it is only recently that its merits have been more widely appreciated. 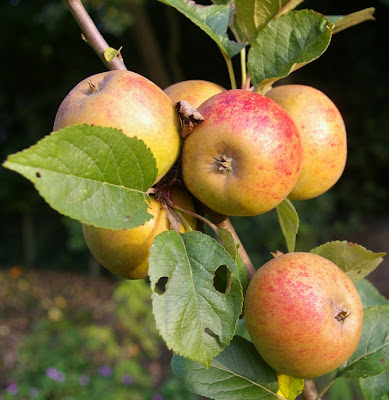