Not only pink, part 2: some less familiar Nerine species

The genus Nerine in cultivation is most often represented by N. sarniensis and N. bowdenii, but there are in fact 25 species in the genus. Several of them are rare in both the wild and cultivation, but many are extremely attractive and well worth growing if they can be obtained. Space precludes me developing a very large collection of nerines of any sort, but I grow a few of these 'other' species. These are all currently in flower. 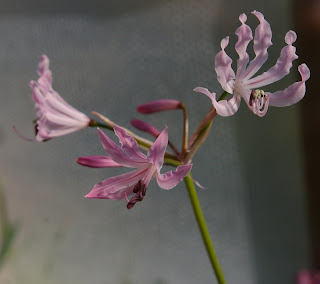 Nerine humilis (above) comes from the Western Cape, where I've seen it growing (but not flowering) in large colonies in thin soil over rock. Like N. sarniensis (with which it will hybridize) it is winter-growing and summer deciduous, producing its inflorescence in autumn and the narrow, flat leaves shortly thereafter. It seems to be easily grown in a very gritty compost and given a dry (but not baked) summer rest. 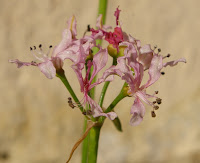 In the Eastern Cape there is a tendency for species to be evergreen, at least in cultivation. One of these, with very narrow,thread-like leaves is the diminutive N. masoniorum (right), which is now considered to be Critically Endangered in the wild due to degradation of its habitat. Having driven through this area of Eastern Cape last month, and seen the environmental degradation thereabouts it was not difficult to see how this could happen. The epithet masoniorum commemorates both Marianne Harriet Mason (1845-1932) and her brother Canon Edward Mason, who was Principal of St Bede's Native College at Umtata, formerly in the Transkei (now Mthatha, Eastern Cape). According to Gunn & Codd's Botanical Exploration of Southern Africa (1981), Marianne 'made leisurely journeys by cart and horses to out-of-the-way places' [in eastern South Africa] collecting seeds and bulbs and painting plants. 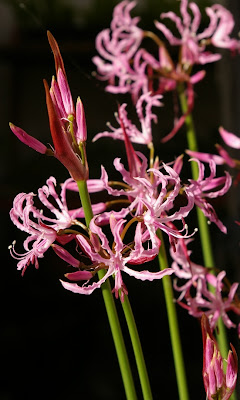 Also from the Eastern Cape are two forms of N. undulata, with broader, flatter leaves that are evergreen until frosted off. The first, seen above, is a very fine plant, producing its bright pink flowers very freely. It is hardy outdoors in southern England and soon makes a good clump, though these plants are potted and kept in the greenhouse. The leaves are long and narrow, which quickly distinguishes the plant from the second form. This was (and often still is) known in cultivation as N. flexuosa but that name is technically a synonym of N. humilis. This plant, with comparatively short, broad leaves, and less 'crinkly' flowers in either pink or white, is placed as a variant of N. undulata by Graham Duncan in his book Growing Nerines (2002) but he suggests that this may only be a temporary holding ground while further studies take place. It is also hardy in southern England, but we only grow the white form in pots at Colesbourne. I'll post a picture when its flowers open in a few days time.