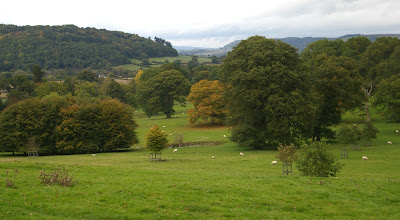 This afternoon I visited Brampton Bryan Park, in west Herefordshire, almost adjacent to the Welsh border, in company with a number of members of the International Dendrology Society attending meetings and events in that area. This is an extremely beautiful area of classic English parkland, grazing land with scattered trees, set in a natural shallow bowl of the hills. Bounded by six miles of fence, this is a statutorily protected Site of Special Scientific Interest on account of its ancient trees, grassland and adjacent woodland and the biodiversity they support: Ravens, Red Kites and Buzzards were conspicuous overhead while we were there.

Despite its great value to the naturalist, the site is perhaps of even more interest to the historian. The Brampton Bryan estate has never been bought or sold: as unoccupied land it was granted by William the Conqueror to Ralph de Mortimer and at the time of the Domesday survey in 1085 it was tenanted by one Richard, known as the Nameless. His descendants held it until 1309, when it passed by marriage into the Harley family, who last year celebrated their seven hundredth anniversary of ownership. The family developed the castle and established the deer park, whose current boundaries are believed to reflect its original layout, probably during the 13-1400s, though it is not mapped as parkland until 1577.  Deer and cattle would have been kept within its boundaries, fenced in by chestnut paling on a bank. Within the park ancient Sweet Chestnut trees planted in lines would suggest that there were internal divisions: today they are magnificent ancient giants. Old oaks are abundant, though hard to date: on the hillside and now surounded by a Redwood (Sequoia sempervirens plantation) is a magnificent veteran pollard oak (right). 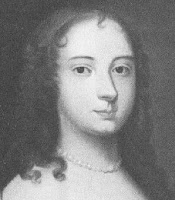 Brilliana, Lady Harley (1600?-1643)
In the 1640s Brampton Bryan was in the hands of Sir Robert Harley (1579-1656), a Member of Parliament, and supporter of the puritan movement: it was at his instigation that the original Charing Cross was pulled down. as an 'idolatrous monument'. As the country descended into civil war he was away from home, and as the Royalist forces advanced on this Parliamentarian seat it was left to his wife Brilliana to defend the castle against a siege. It is fortunate that her letters to her absentee husband have survived as they give a vivid picture of her life both before and after the first siege, which lasted from 26 July  to 9 September 1643, when the Royalist forces moved off to concentrate for what would become the first Battle of Newbury. The effort of defending the castle wore her out, however, and she died of a cold in October 1643. The castle was again besieged in 1644 and taken and sacked in April that year. It remains ruined, adjacent to the house the Harleys built following the Restoration.

In the meantime, however, Sir Robert fell out with Oliver Cromwell and was imprisoned for a while, and his sons were also treated harshly. Cromwell's death, on 3 September 1658, coincided with a strong gale that was widely seen as a portent of his passing. It caused great damage at Brampton Bryan, occasioning this bitter comment from Sir Edward Harley, who had succeeded to the estate: "I wish the devil had taken him any other way than through my park, for not content with doing me all the mischief he could while alive, he has knocked over some of my finest trees in his progress downwards."  (Most information from Audrey Sidebotham's pamphlet Brampton Bryan Church and Castle, 1990.)


The current state of the park is due to the current Edward Harley and his wife Victoria (who showed us around), who inherited it in an overgrown state and has worked hard to restore it to its current beauty with careful management (although one feels that care must be taken not to make it too tidy). Large numbers of new trees have been planted, mostly oaks raised from homegrown seed and it was interesting to see several trees with a wide sheet of fleece spread below them, catching the current year's bumper crop of acorns. 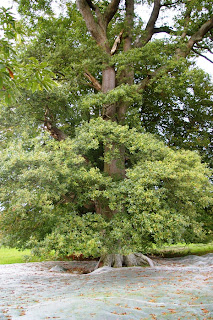 Collecting the acorn crop from a Sessile Oak, Quercus petraea.
Posted by John Grimshaw at 22:30