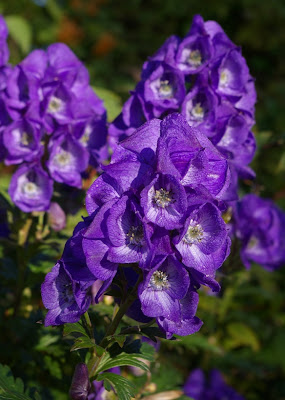 The large late herbaceous plants are continuing to provide a lot of colour in the garden. Among those that are not composites are several selections of Aconitum carmichaelii, in its broad sense, of which two are particularly fine. 'Royal Flush' (above) is named for its young foliage, which emerges rich red in about March, and is quite striking for a week or two then before it turns to dark green.This shade is maintained through the season and thus complements the dark purplish blue flowers now: pallid and tatty foliage at flowering time mars several monkshoods, but not this one. The flowers are held in short, rather dense spikes on stout stems that are no more than about a metre in height, making it particularly robust and not prone to collapse.

The second is ‘Spätlese’ (right and below), whose name betokens its lateness, a taller clone with excellent vigour. Its only flaw is a tendency to pallid foliage, but amongst other plants this is not too noticeable and the pale blue flowers go well with most other pastel shades. It was planted next to Lythrum salicaria 'Blush' to attempt a pink-blue combination, but the Lythrum has usually finished by the time the Aconitum starts, so it actually partners the next clump along, Ligularia sp. HC970257 which is still producing masses of soft yellow flowers (visible to the left in the image below: the orange flowers are from Helenium 'Sahin's Early Flowerer'). 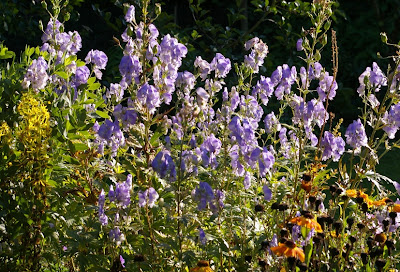