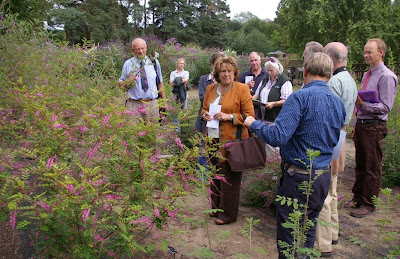 Trialling plants for their garden-worthiness is a major function of the Royal Horticultural Society's work, conducted over all classes of plant. As wide an assemblage of material as possible is procured for each trial, and this is then grown together, with every entry receiving identical treatment. The trial is judged at intervals by the appropriate group from the Trials Committee - sometimes visiting every week or fortnight during the flowering season - and each entry is assessed for its qualities by a panel of experienced horticulturists. The aim is to see which plants perform best and can be granted the Award of Garden Merit for their all round performance: an AGM is an accolade to the plant and a commendation to gardeners. It has nothing to do with novelty, just steady garden performance, so can be won by any cultivar that achieves the standard required. 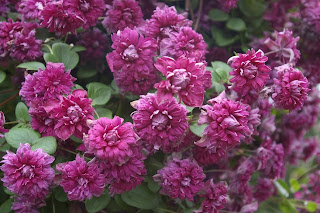 Clematis 'Purpurea Plena Elegans' dates from Elizabethan times: its extant AGM is likely to be renewed.

The Woody Plant Committee delegates the work of assessing trials to a few of its members who also sit on the Trials Committee, but is responsible for ratifying any awards made, so this was an opportunity for us to have a look at the plants and get an idea of their merits for ourselves. We started with the Clematis viticella trial, grown on the Portsmouth Field. Two plants of each cultivar are grown up a secure wire frame - there are about forty cultivars in the trial. Although many had passed their peak the diversity of flower size, shape and colourin this rather diverse group could be appreciated - but also their vigour, foliage character and resistance to disease, which are all equally important in an assessment. With Raymond Evison, the well-known Clematis breeder and nurseryman from Guernsey, as our Chairman, we were able to be particularly well informed about the background of the cultivars, while our trials members brought us up to date on the relative standings of each cultivar to date, two years into a three year trial. Many of the cultivars are very familiar, but it was good to see some new ones too. I particularly liked 'Evipo036', sold as Confetti, with richly pink nodding flowers (right), a view which was widely shared.

After lunch we went to the other end of the garden to see the trials of Weigela, Indigofera and related legumes, and Buddleja. I skipped the weigelas and only skimmed through the buddlejas as I needed to get home before the effects of an overnight flight took hold. 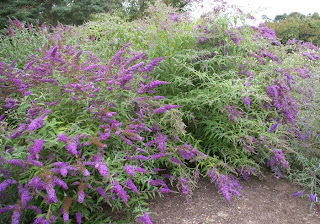 Buddleja davidii is a species I have reservations about. Spectacular though a bush of, say, 'Pink Delight' or 'Ellen's Blue' is, or the pleasure of seeing a wildling covered in butterflies, I can't easily forgive the problem of the lingering dead brown flowers at the base of the inflorescence, turning the bush dingy before it's really got going, and the invasivity of the species is a major problem. While it has advantages for insects the dominance of the plant causes a diminution in the diversity of everything else. The trial is however a spectacular demonstration of the diversity of B. davidii in gardens, with some other species as well. My favourite, as it was last year, is a short-growing cultivar named 'Camkeep' and sold as Camberwell Beauty (left, above). Although it is a fairly ordinary colour it has the great advantage of having branched inflorescences: this has the benefit of somewhat obscuring the objectionable dead flowers as the side shoots develop and open their buds. The phenomenon is also seen in the more familiar, but much taller cultivar 'Dartmouth' (visible at the right of the image above), and another one I noticed in the trial, 'Antoinette'. 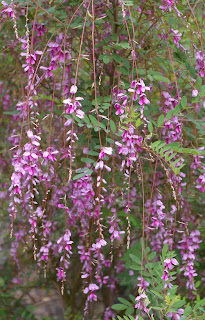 Indigofera is a much less familiar genus, but contains some excellent garden plants - and many that in my opinion are only for collectors. I. heterantha is probably the most widely grown, forming a big bush if unpruned, or coppicing vigorously from the base if cut back in spring, and bearing masses of bright pink flowers all summer. Equally striking, but much less well-known is I. howellii, formerly grown as I. potaninii, which produces its long inflorescences from April to the frost in autumn (see top picture). I have never been terribly impressed by the usually grown stock of I. pendula, which seems a bit 'thin' and underwhelming, and this was very evident in the trial as it was growing next to a greatly superior form, with a more concentrated display of brighter-coloured flowers (right). This has, as yet, no name by which to distinguish it, but its desirability has been demonstrated by the trial and a name will be applied in due course.
Posted by John Grimshaw at 12:27