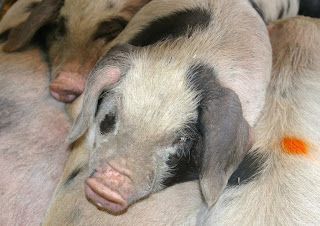 Once I had crawled out of bed this morning I went down to the annual Breeds of Gloucestershire livestock auction at Cirencester Livestock Market. The best excuse is that I am still looking for a new Silver Sebright cock (see my post of 7 May 2010) - I was certainly not in the market for anything four-footed - but no excuse is really needed. There was a pen of Silver Sebrights in the poultry sale, but I didn't think they were up to standard, so left them well alone. 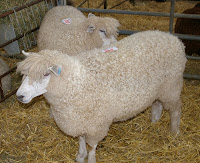 Gloucestershire has three unique traditional livestock breeds, the Cotswold sheep, Gloucester cattle and Gloucester Old Spot pigs. Cotswold sheep are large, producing wool with a long staple, and big joints of rather fatty meat. With lean meat being generally preferred and wool at a very low price they are now kept more for ornament than anything else - although the Colesbourne flock does a very good job at 'mowing' the grass in the park. A topknot of wool is always left on the head of a Cotswold sheep to show prospective purchasers its potential quality. The other two breeds are both the source of name-protected food. 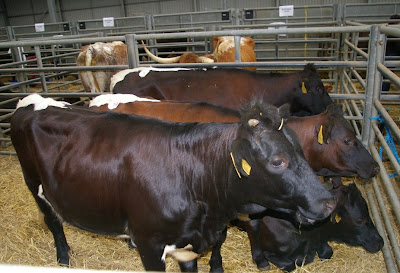 Single Gloucester cheese has the status of Protected Designation of Origin (like champagne or Parma ham), and must be produced in Gloucestershire on farms that maintain a herd of Gloucester cattle - a bit of a weasel-worded description if you ask me. It is a naturally-coloured hard cheese (unlike the annato-coloured Double Gloucester,which long since escaped to the realm of mass production) with a light taste and texture. The cattle are typically black or reddish, with a white stripe along the back from the tail: as a breed they almost died out after the war, but are now kept in reasonable numbers once again.

Most famous of the three is perhaps the Gloucester Old Spot pig, a traditional large, fat breed that used to be especially associated with the apple orchards of the Severn valley, where they were turned loose to feed on windfalls: it was said that the spots on the skin were derived from bruises where the apples had hit them. As a source of well-flavoured pork they are much prized - we had some Old Spot sausages at the Colesbourne Inn last night - and Old Spot pork has just been given protection in the category Traditional Speciality Guaranteed, implying that the pork has been raised from pedigree animals in the county using traditional methods. Interest in the pig auction seemed to be particularly keen (right). 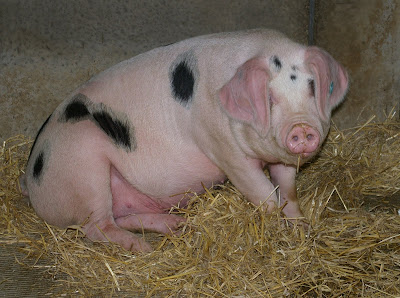