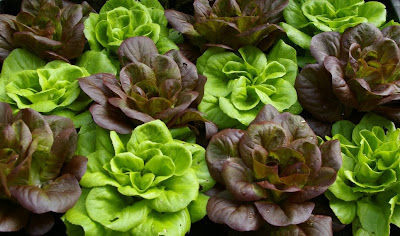 Each spring I am the grateful recipient of a box of seed samples from the Dutch vegetable seed company Rijk Zwaan. This is a major breeder and producer of vegetable seeds, with a strong international presence, but as with so many companies its name seldom appears on the produce we buy.

Among the assortment for the past few years have been packets of Rijk Zwaan's recent development in lettuce, the Salanova ® series. What makes them special, in commercial terms, is that they have been bred to have large numbers of small leaves, that fall apart with one cut across the base, thus making them extremely useful for the packed salad market, or for easy preparation in the kitchen (see the Colesbourne-grown specimen, right). A special gadget has even been developed to allow the cut to be made in just the right place.
As a major commercial entity, the Salanova lettuce has a website of its own, and is the subject of a major promotional campaign - under the unfortunate slogan 'Taste the nova way of living'. 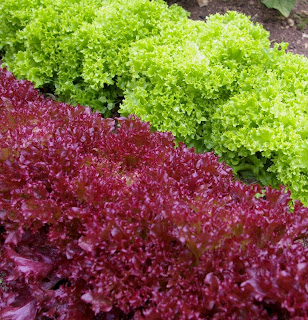 The  easy preparation is indeed convenient - and the lettuces are nicely tasty - but I like them for their ornamentality. We grow them in containers outside the cottage door (top picture, red and green multi-leaf butterhead), enjoying their appearance before thinning them out for a salad, and in the vegetable garden they are also very decorative (above, red and green incised-leaf grown in a shallow crate). I think the green multi-leaf butterhead (below) is my favourite, not only for its culinary qualities, but for the tight, beautifully arranged head of leaves in growth, giving a suggestion of the 'quartered' shape of an old-fashioned rose, which increases as the head matures. Cultivation is as easy as for any other lettuce and I find that if a late sowing is grown in crates in the polytunnel they can be picked late into November. 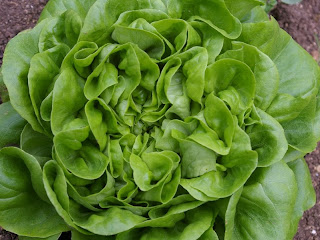