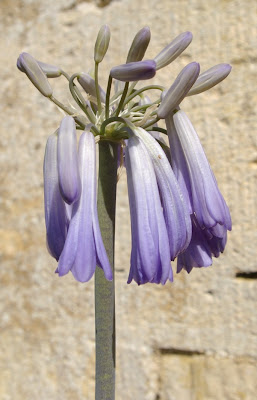 In 1998, or thereabouts, I was sent a packet of seed of Agapanthus walshii, by Barbara Knox-Shaw, of Elgin near Cape Town. It germinated well and seedlings were potted up. Quite a few were given away and I kept some for myself. Most of them died, and since I came to Colesbourne in 2003 I have had a solitary plant, growing slowly in the greenhouse, and never flowering until now. It is potted in a mix of loam and a lot of grit, fed every week in summer with Phostrogen (it's a one-size fits all regime in the Colesbourne greenhouse).

The common Agapanthus in the area around Cape Town is A. africanus - the first of the genus to be discovered and grown in Europe. It is a winter-growing, evergreen plant, and has a reputation for being very tricky to grow: the name, however, is ubiquitous in the horticultural trade, but this material is always one form or another of A. praecox. This is a summer-growing evergreen species that, while somewhat tender, is at least amenable to ordinary pot cultivation and provides many of the best Agapanthus cultivars as selections or hybrids.

Agapanthus africanus has open-faced flowers held outwards in the umbel, like most members of the genus. It was not surprising then, that when an Agapanthus with pendulous, rather tubular flowers, was discovered at the Cape in 1918, it should be regarded as a new species. It was named A. walshii. Recent studies have shown, however, that africanus and walshii are very closely related, with the result that in their study of the DNA weight of Agapanthus (2003), Graham Duncan and Ben Zonneveld treat this plant as A. africanus subsp. walshii. It is a rare plant in the wild as well as in cultivation, and the largest known site (which Barbara and Graham took me to see in 2004) is being encroached on by what is known in South Africa as 'informal housing' - a shanty-town anywhere else. 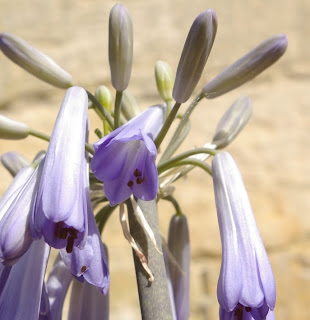 The forms of A. africanus are all winter-growing in the wild, which poses problems in the low-light conditions of northern Europe. I have found however, that my plant of subsp. walshii has remained apparently growing, though always very slowly, through the year. It has produced just one fan of neat, short, green leaves, with no sign of an offset, and the current scape has arisen direct from its centre. This worries me rather, as Graham Duncan, in his excellent account of the plant in Curtis's Botanical Magazine, August 2004,  reports that it is prone to die after it flowers. At Kirstenbosch he gets round this by feeding flowering plants heavily with a fertiliser made from concentrated chicken litter, so I must try to find something similar, at least in effect.
I have been surprised at how tall the inflorescence is - I had been expecting something more in proportion with the fan of leaves - but illustrations of wild plants show that it always greatly exceeds the foliage. Although the leaves show no wax, the scape is strongly waxy. The pendulous flowers are very reminiscent of A. inapertus in their tubular shape and posture; they are said to vary in shade of blue in the wild, and white forms are known.
Posted by John Grimshaw at 18:31