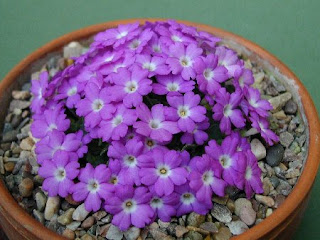 Dionysia archibaldii
The sad news that Jim Archibald died yesterday has just reached me. Widely recognised as one of the greatest contemporary plant hunters, for nearly fifty years he was at the forefront of plantsmanship, issuing his first seed list in 1962 and then from 1964-75 running The Plantsmen nursery with Eric Smith. In more recent times he and his wife Jenny were best known for their seedlists full of the choicest plants, often available nowhere else, mostly in the range that is often broadly classified as alpine, though dryland and mediterranean might be more accurate. The descriptions and notes were always meticulous and the JJA catalogues are a mine of information. Only this morning I was looking for some information from them, but didn't have the right issue so thought how useful it would be to have them available online or on CD. Not least of the pleasures of reading an Archibald catalogue were Jim's commentaries on matters, or bodies, horticultural. They did not always endear him to the establishment that was the target of his swipes!

Both a scholar and a grower, Jim Archibald's knowledge of plants was both learned and practical - his article 'Silken, sad uncertain queens' on Oncocyclus Irises, in the AGS Bulletin in 1999, demonstrates this to perfection. Although many of the seeds in their list were wild-collected, many were also grown in several large greenhouses at the Archibalds' home in south Wales under immaculate conditions. The contribution Jim and Jenny have made to horticulture has been assessed by Bobby Ward in his book The Plant Hunter's Garden (2004)  and what is probably the first of many tributes to Jim is available on the Scottish Rock Garden Club's website at http://www.srgc.org.uk/smf/index.php?topic=5879.0 .

The image of Dionysia archibaldii is by Jim Almond, borrowed from his site Alpines for the enthusiast. The plant was discovered by Jim Archibald at high atitudes on Zardeh Kuh peak in Iran in 1966, and although difficult to grow has been maintained in cultivation ever since. It was named in Jim's honour by the Norwegian botanist Per Wendelbo.
Posted by John Grimshaw at 14:11