Views from an African garden 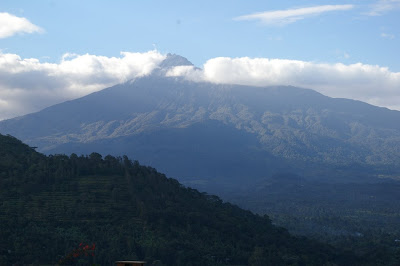 Mt Meru from Moivaro
I got back yesterday from my brief trip to Tanzania, where I was helping my old friend Charles Foley prepare a technical report. We were busy at work each day, so I had no chance to get out into the bush and there are no dramatic tales of any sort to tell.

Charles and his family live just outside the northern Tanzanian town of Arusha, well-known as the 'safari capital' of the country, on one of the numerous parasitic cones that pimple the lower slopes of Mt. Meru. The site has a magnificent view of the southern slope of the mountain to its jagged summit, Africa's fifth highest at 4,566 m (14,980')  (above). The vista is always verdant, comprising a mixture of small plots of cultivation (mostly maize and bananas), planted trees and remnant native forest, up to the montane forest cloaking the mountain's slopes (now fortunately included within Arusha National Park). Below the park boundary the greenery conceals the homesteads of a bustling human population, whose mostly gentle noises can be heard from the house - children playing, the chopping of wood, the crowing of a cock - hundreds of cocks at dawn, and at night the barking of a multitude of dogs. But it is the sound of an African village, with only an occasional engine, or blast of a radio to place it in the modern era.

Arusha is noted for its temperate climate and abundant moisture - hence the verdancy - but at this time of year the weather is not at its best, with much low cloud and distinctly chilly temperatures, not what one would expect from tropical Africa at 3 degrees south of the Equator. The Foleys' home is at about 1400 m, well-exposed to the breeze, but sometimes not very far from the cloudbase; sitting inside on Sunday we gradually added layers of clothing to keep warm. Fortunately the clouds thinned sufficiently on Monday afternoon for the upper part of Kilimanjaro (about 70 km away) to become briefly visible (right), but both mountains were rather coy of their appearances.

The compound, which Charles and Lara share with Eddy Husslage and Mary Strauss, covers several acres, and contains a charming mixture of native and ornamental plants. Most of it is native grassland with some surviving indigenous trees, amongst which Erythina abyssinica and the Sausage Tree (Kigelia africana) are especially noteworthy. Most striking on this visit, however, was the flowering of the grass Melinis repens, whose fluffy pink inflorescences light up in the evening sunshine. 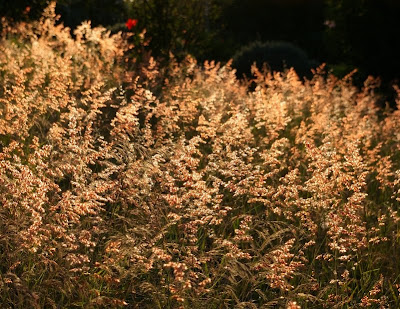 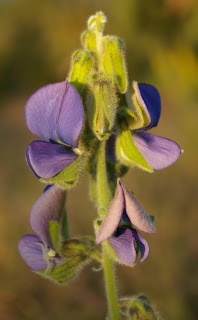 The grassland contains a rich diversity of herbs, including several species in the large legume genus Crotalaria. They may be low-growing annuals to small trees, but all have inflated pods in which the seeds rattle - Crotalus is the generic name for rattlesnakes. Most members of the genus are yellow-flowered, but a few are blue, including C. polysperma, which was in flower this week.
Mary and Lara have added a lot of additional plants to the grounds however - native, ornamental and culinary. There are productive vegetable patches and fruit trees such as coffee, banana and citrus are joined by real exotica such as Litchi chinensis, currently flowering for the first time. Whether the climate is warm enough for it to produce a crop of lychees remains to be seen; it is certainly not cold enough for apples or pears to fruit, though in Arusha town I saw several peach trees flowering well. 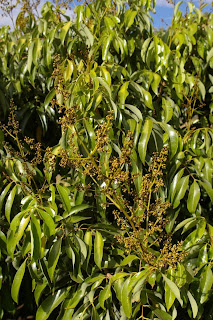 Litchi chinensis
Visiting in the dry season meant that the flowering ornamentals were not at their best, but there was plenty to admire and for the sunbirds to work through in their endless quest for nectar and small insects. The South African Tecoma capensis (Bignoniaceae) is seldom out of flower and always attractive with its orange or salmon-pink flowers, while its relative Podranea ricasoliana (left) has magnificent big pink trumpets with hairy throats. 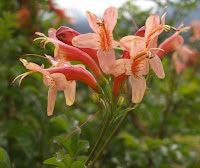 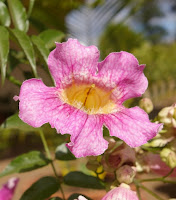 Being on a slope of a hill built up of very free-draining volcanic ejecta means that the garden does not grow the lusher sorts of tropical foliage plants well - but succulents thrive. Several aloes were in flower, including this attractive yellow-flowered species (below). I shall have to sit down with the Flora of Tropical East Africa to try to get an identification for it. 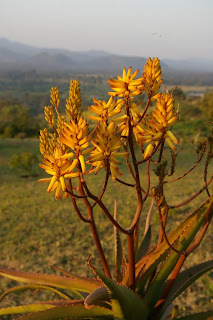 Twenty years ago, when Charles and I first worked in Tanzania, the country was just beginning to emerge from its most desperate period of poverty and goods of all kinds were scarce and hard to come by: we were advised to buy any toilet paper available, for example. Now, in Arusha at least, there is a burgeoning African middle class in addition to a large expat community and one can get whatever one wants, at a price. One of the products of this increasing affluence is the existence of numerous roadside nurseries, producing a wonderful diversity of all kinds of plants. 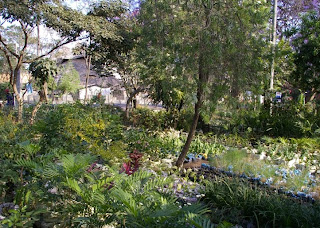 Roadside nursery in Arusha, Tanzania
Posted by John Grimshaw at 19:27