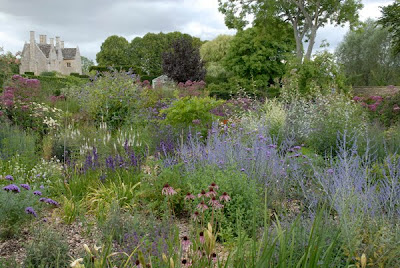 Yesterday evening the Oxford & District AGS Group visited the garden of Radcot House, near Faringdon, Oxfordshire, home of Robin and Jeanne Stainer. Approaching from Faringdon one gets a brief but wonderful view of the broad sweep of the upper Thames Valley - a gentle landscape, made up of a patchwork of fields, woods and hedges. Radcot is at the centre of this, at the end of an ancient causeway across the Thames and, as our host explained, the village has had a long history, but 'going downhill from Domesday'. Adjacent to the garden is  the site of a Norman fort once held for Matilda, and Radcot House itself was the focus of a Civil War siege, ended when a Parliamentary shell came through the roof and blew up the beer supply. The main part of the current house dates to 1648, but incorporates earlier elements.
In this setting the Stainers are busy making a beautiful garden of about 2.5 acres, with the stated aim of giving a feeling of space. They inherited some great features, including a long allee of beech hedging and some fine tall but narrow yew hedges, that immediately provide the walls for garden rooms, and some noble old fruit trees provide continuity with the past. Much of the garden is designed to be seen and enjoyed from a sitting position - a diversity of seating is provided throughout - which gives a rather different perspective to normal ambulatory viewing. Seated in a beautiful pavilion (below), for example, one is surrounded by the swirling patterns and colours of the prairie-style planting around. 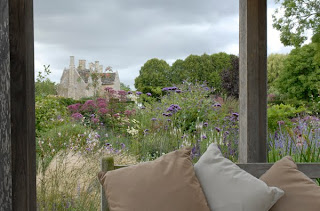 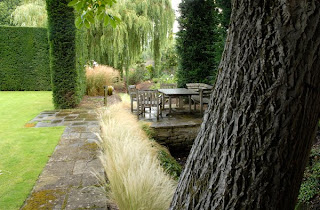 Elsewhere there are more formal borders, planted for vibrant colours, mostly in the blue, pink, purple spectrum, but with here and there a bright, enlivening flash of yellow or orange, and all leavened by plenty of grasses, but equally there are quiet areas, such as the area around the long formal pond where there is minimal planting. I was taken by the beauty of the lawns of fine grass, which reflect the effort that has gone into the garden as much as the borders do.
The photographs in this post were kindly supplied by Nigel Birch, as I had stupidly left my camera at home.

The garden at Radcot House is open for the National Gardens Scheme on Sunday 22nd August and 19th September and is well worth a visit.