The varied colours of Agapanthus 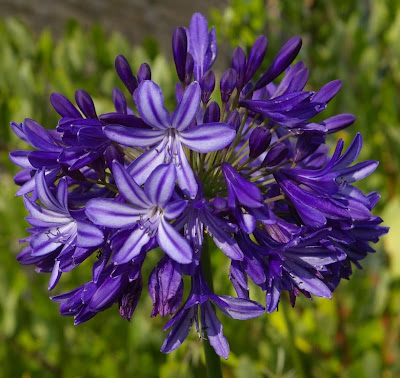 Agapanthus 'Northern Star'
Agapanthus is one of my favourite genera and makes a really valuable contribution to the garden at this time of year. Over the years I have built up a selection of different species and cultivars with considerable diversity of flower colour, shape and inflorescence character; this gallery gives a sample of some of them. Many have come from Pine Cottage Plants in north Devon, where Dick Fulcher has a wonderful collection and nursery specialising in Agapanthus.  The fabulous blue 'Northern Star' (above) is one of his selections and is hardy in the British climate. 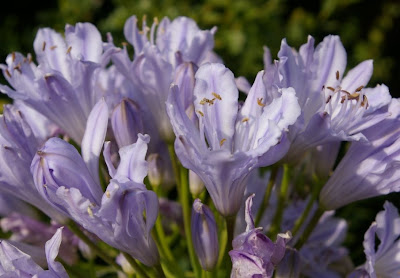 Agapanthus 'Sarah', an evergreen cultivar derived from A. praecox and thus better suited to pot cultivation in the UK. It has extra perianth segments, giving it a distinctive appearance.

People seem to expect Agapanthus to be tender. Some are, some aren't. Evergreen species and cultivars, mostly derived from A. praecox, are usually not hardy (although they often survive a normal British winter in a defoliated state), while those derived from deciduous species, especially from A. campanulatus, are usually completely hardy anywhere in Britain, except perhaps the interior Scottish Highlands. Some of these are the Headbourne Hybrids, raised by Lewis Palmer at Headbourne Worthy in Hampshire: many of the named clones are still worth growing, but the name has been bowdlerized by the medley of seedlings sold under the Headbourne Hybrids name. There are intermediates in hardiness, where long-term survival depends on conditions: A. inapertus is hardy in some southern English gardens, but not at Colesbourne. Its narrow pendulous flowers are very distinctive and its influence can be seen in several hybrids, such as 'Midnight Cascade' (below). A. inapertus 'Graskop' (above right), a wild find in South Africa, was for a long time the most darkly desirable and greatly coveted Agapanthus, but now seems sadly small and bright! 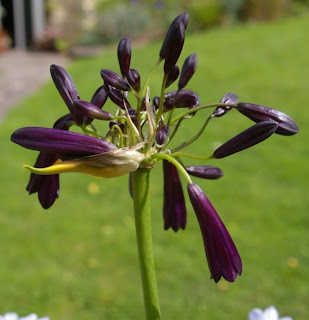 Agapanthus 'Midnight Cascade' - probably not very hardy, but I haven't tried it outside yet. 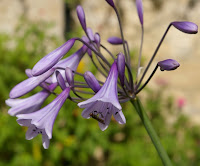 Agapanthus caulescens is another deciduous species that has been used in breeding and selection and seems to be moderately hardy. It can give some interesting flower colours with a purplish hint: this is particularly obvious in 'Liam's Lilac' (left), a Dick Fulcher selection that has been hardy here for several years.
One of the great myths of gardening, endlessly trotted out, is that Agapanthus need to be crowded in a pot (or even in the ground, which seems strange) before they will flower well. Just try it. Crowding almost always means starvation, and aggies are greedy feeders - flowering performance almost always diminishes rapidly once the plants begin to feel starved. They do flower best when properly established, however, but establishment does not need to mean crowded. 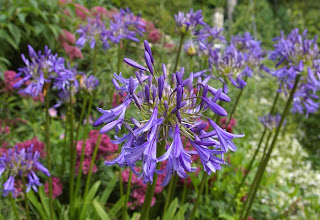 Agapanthus 'Loch Hope', currently flowering extremely prolifically at Colesbourne Park (with Phlox 'Natural Feelings');  it is one of the cultivars selected at the Savill Garden in the 1970s and still a superb hardy garden plant. I bought a plant of it from there in 1983, from which this patch is derived. 'Windsor Grey' (below) is another from this stable. 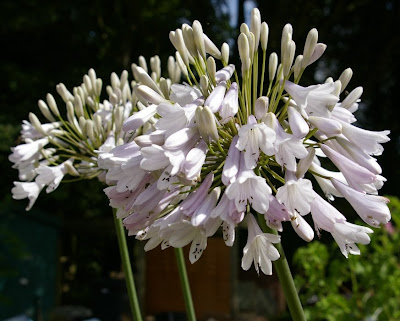 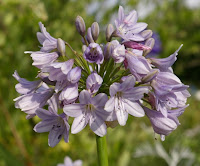 Colour varies in all the species, with whites and pale blues occurring occasionally in natural populations (e.g. the pale A. campanulatus subsp. patens, right), and there are innumerable white cultivars in all groups. The one illustrated below is a hardy deciduous plant and I like the yellow-green tips to the buds, but I don't have a name for it. It came from a Dutch friend's garden. 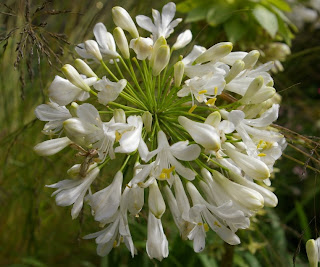 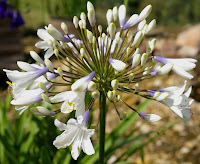 Green-tipped buds are also visible in 'Enigma' (right), an evergreen derivative of A. praecox that I grow in a pot and keep frost-free and dry in winter (even hardy clones dislike being frozen in wet pots in winter), but it is usually admired for its bicolored blue and white appearance. Another bicolored A. praecox, but with a much taller scape ('Enigma' is quite short), and less intense colours, is 'Selma Bock' (below). It has huge heads (when fully expanded) and is a stunning plant for a tub on a terrace. 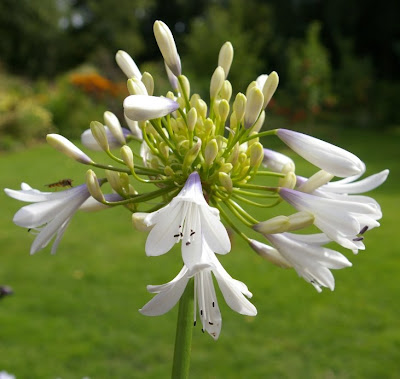