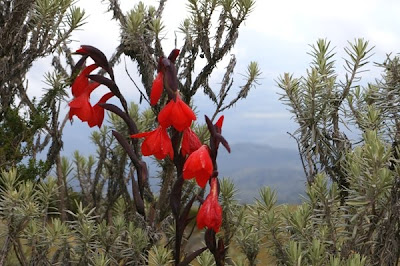 Gladiolus watsonioides with Helichrysum nandense on Mt Kenya, October 2007
One of the plants whose flowering I most look forward to each year is Gladiolus watsonioides. This is an old friend from East Africa whose acquaintance I first made on Kilimanjaro in 1990, but have since met on other mountains. It is found only on the higher mountains of Kenya and Tanzania, growing in the forest and high altitude heathland at altitudes of up to 3900 m, making it the highest-growing wild Gladiolus. When growing above the forest it experiences frost almost every night of the year, as well as the unchanging pattern of equal day and night length through the year (Mt Kenya almost straddles the Equator): it is a pattern well characterized by the great Swedish botanist, the late Olov Hedberg, who described the climate as 'winter every night, summer every day.' In these conditions it grows almost year-round and flowers are always to be found, it seems.


In cultivation it is also of uncertain pattern, so in consequence I grow it in the cool greenhouse where its shoots may emerge at any time. Flowering, however, always seems to take place in late summer. 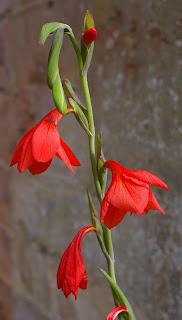 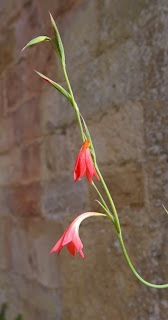 The plant I became familiar with on Kilimanjaro is a slender plant, with small, pale orange-red flowers, generally growing in openings in the upper forest: pretty but not spectacular (left, above). The species was first named from Kilimanjaro specimens in 1886, so when a larger and far more spectacular Gladiolus was found on Mt Kenya it was not unreasonable to give it a separate name, G. mackinderi, in honour of Sir Halford Mackinder who made the first ascent of the mountain in 1899. In my experience this represents a much more robust plant, typically growing in the high altitude heathland (as in the top picture, and above right), with larger, brighter red flowers, very different in appearance to the rather weedy Kilimanjaro plants. For the first time I have plants from both mountains flowering together in the greenhouse and I'm fascinated to see that the differences I know in the wild are also evident in cultivation (as these were obtained from British nurseries I cannot be accused of collector bias!). In the wild it seems that there is a continuum in flower size between these extremes, justifying the view that they are all forms of one species. For gardeners, however, there is no doubt that it is the Mt Kenya form that is the one worth growing.

Gladiolus watsonioides showing the difference between forms from Mt Kenya (upper plant) and Kilimanjaro.
Posted by John Grimshaw at 19:38