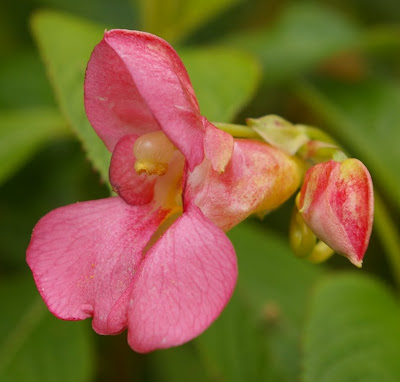 On the principle of a Snowdrop lunch, where enthusiasts gather to discuss their plants, yesterday afternoon I held an Impatiens Tea Party, for a few enthusiasts of this undervalued genus.Well, most of it is undervalued: Impatiens walleriana, the ordinary Busy Lizzie, is the world's most popular bedding plant, and as such is highly valuable to the horticultural trade, and apparently valued by those who plant it.

The focus yesterday was, however, on unimproved, wild species of this genus of about 1000 known species. They show extraordinary diversity of flower shape and coloration, as well as plant habit. Most are perennial, some are hardy and most not, with a few annuals. Most are from the tropics and subtropics of Africa and especially Asia, with just six species native to the Americas, and one in Europe.The genus fascinated Sir Joseph Hooker, who studied it intensively in his years of 'retirement', and his study of the African species earned Christopher Grey-Wilson his PhD. His monograph Impatiens of Africa (1980) remains the standard work, but there is no single treatment of the Asian multitudes. Their diversity, and the difficulty of making a decent herbarium specimen that retains some hint of the complexity of flower structure, gives taxonomists a sever challenge, and I am sure that there are many more new species to be discovered. In recent years the genus has had major champions in Britain and the United States: Ray Morgan from Swansea, whose book Impatiens, the vibrant world of busy lizzies, balsams and touch-me-nots came out in 2007, and Derick Pitman of Sacramento, 'Mr Impatiens', who runs a website devoted to the genus, with galleries showing a huge number of different species. 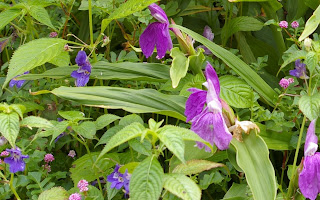 One of the more recent species to be named is Impatiens namchabarwensis, described in 2005. The principal author was Ray Morgan, who told us yesterday how it had been found by a Swiss traveller in the Tsangpo Gorge, and who had sent Ray a few seeds. Of these, six germinated, and from these the whole stock in cultivation is descended. With amazing blue flowers it caused a great deal of excitement - the idea of a blue Busy Lizzie loomed in the minds of the breeders - and it rapidly became widely offered in the horticultural trade, sometimes under the false claim that a dwarfer strain had been selected. I got a plant from Ray in 2004 and it soon became evident that it was a very prolific self-sower, as it still is in a dampish border at Colesbourne Park (right, with Roscoea purpurea and Persicaria runcinata). Discussing this yesterday, others in the group said that while it self-sows freely in their greenhouses, it doesn't do so outdoors for them.

Prolific seeding is one of the demerits of some species in the genus, notably I. glandulifera, but when happy most species will produce self-sown seedlings. Among these is the Ethiopian I. rothii (pic at top), which provides a few seedlings for distribution each year. It has proven hardy here over the past five winters, dying down to large tubers like those of I. tinctoria, to which it is related, and emerging in spring to form a wide bush topped wth salmon-pink flowers. 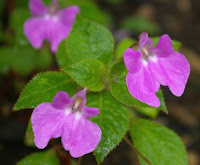 African species are my particular interest, having become familiar with and fond of them during my work in African forests. Most grow in cooler, montane forests, and do not enjoy summer heat. With cooler damper weather, and shortening days, they are now coming towards their peak, especially I. kilimanjari, I. pseudoviola and their hybrids. One of my favourites is I. hoehnelii, in the form from the Cherangani Hills of north-west Kenya (left), which has quite large pink flowers shaped somewhat like butterflies. None of these is hardy (although seed sometimes winters outdoors to germinate in spring), so cuttings have to be taken each autumn and the plants overwintered in a cool greenhouse. There are several hardy Asian species, of which I. omeiana is the most familiar, and the list is growing as people experiment with them. 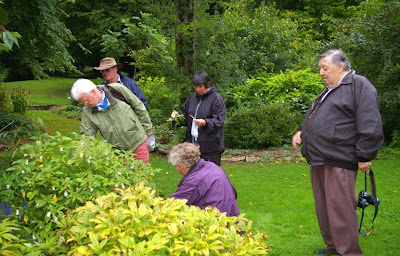 The 'Impatient Gardeners' gather cuttings of one of the nicest hardy Chinese species, the white form of I. arguta (Roy Lancaster, John & Lynsey Pink, Derry Watkins, Ray Morgan).
Posted by John Grimshaw at 11:49