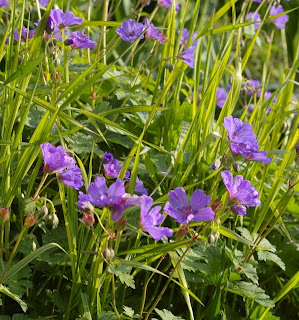 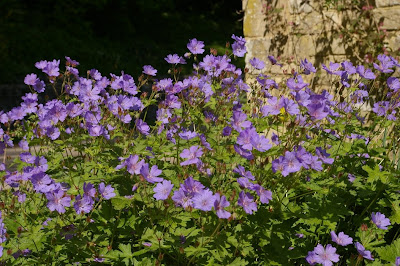 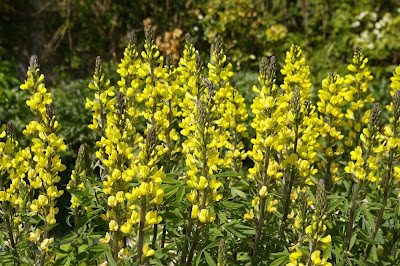 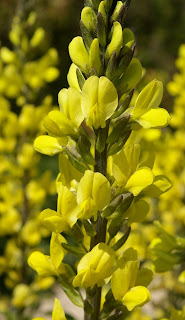 As the bulb season comes towards its close the larger herbaceous plants begin to make more impact in the garden. These two are favourites of mine, though both have relatively short seasons and slightly difficult aftermaths.

The cranesbill came to me from the Garden House in Devon, where it has been grown as Geranium libani x peloponnesiacum. Fortuitously, just after I'd finished this piece, Matt Bishop called and I was able to ask him about it. He tells me that this is indeed the parentage and that it is one of Alan Bremner's multitudinous Geranium hybrids and has now been given the cultivar name 'Solitaire'. As the pictures show it is a floriferous plant, producing many flowering stems up to 50 cm or so tall above the mound of foliage. The flowers are a soft lavender blue with darker veins. It seems tolerant of a range of conditions, though is probably at its best when a bit starved and thus kept compact. It emerges in late winter here (possibly earlier in milder gardens) does its thing now and then rather quickly dies down and becomes dormant for the rest of the year. This is unfortunate, as a large patch does leave quite a gap; you can't plant anything over the dense rhizomes, so the classic solution is to let something flop over the empty space, but 'what?' is always the question. In the cottage garden my clump has been infiltrated by the stolons of the vigorous grass Bromus inermis 'Skinner's Gold'. The result is rather attractive, suggesting a cranesbill in a meadow, while the grass will develop more as the Geranium dies down.

The aftermath of the next plant, Thermopsis chinensis, is less troublesome, but not ideal. It flowers now, on unbranched stems, but later becomes quite bushy with the pods hidden amongst the foliage. The plant looks alright until about August, then becomes tired-looking and really needs to be cut away then if grown in a tidy sort of place. Curiously, Thermopsis chinensis does not appear in any of my standard references on perennials, though the Plant Finder lists a couple of nurseries that stock it. The plants at Colesbourne Park, where it is currently a lovely feature in the main border, were grown from seed I brought from Holland: we grew it as a crop when I worked for Sahin. I believe the stock originated with the very useful China National Tree Seed Corporation and it seems to fit the description for the species in Flora of China. It is a classic soft-yellow Thermopsis and I like the effect of the flowers above the dark stems and slightly pewtered leaves. Best of all, it is a solid clump-former, so does not run about as some of its kin do.

Seeng the pictures in close proximity like this suggests that here is an ideal combination for the border, with a late-developing plant in between to occupy the site in late summer.
Posted by John Grimshaw at 18:27