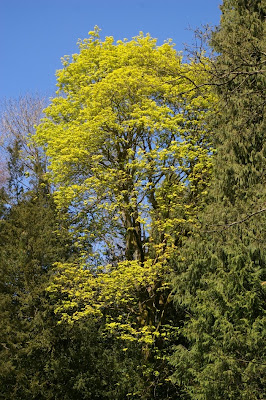 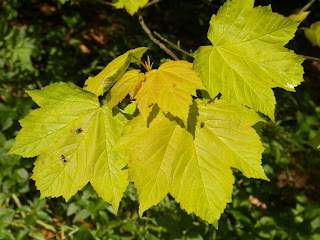 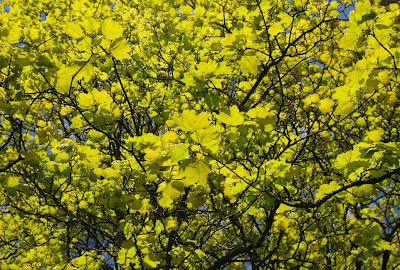 One of the most attractive trees at Colesbourne Park in spring is a gold-leaved Sycamore (Acer pseudoplatanus) growing on the lake bank, rather wedged between some conifers, but shining out in the sunlight. It is a grafted plant, with the graft close to the ground, so there's no chance that it's a random seedling, but with no records available it is not certain which cultivar it is. Two golden Sycamores are known, 'Corstorphinense', propagated from a tree that grew in the Edinburgh suburb of Corstorphine from c. 1600 to 2005, and 'Worley' (the currently accepted spelling) a German selection made in 1879. Studying the literature I've come to the conclusion that the Colesbourne tree is 'Worley' as it has red petioles and five-lobed leaves that are a rich orange-yellow as they emerge: the colouring of 'Corstorphinense' is paler, it usually has three-lobed leaves and pale petioles. It doesn't stay yellow for long, fading quite quickly to green that is hardly lighter than any normal Sycamore, but in its spring flush it is truly spectacular.
Posted by John Grimshaw at 17:30