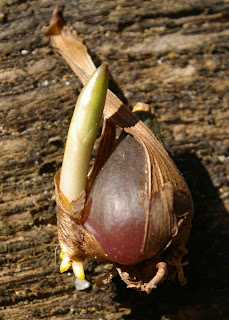 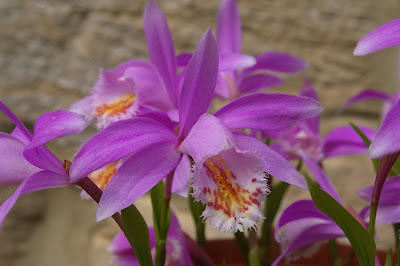 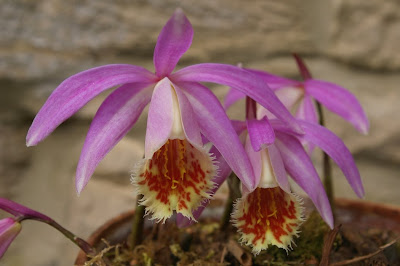 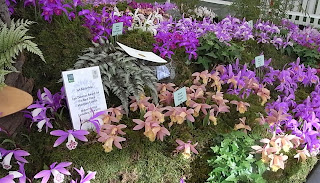 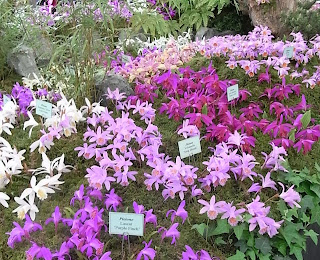 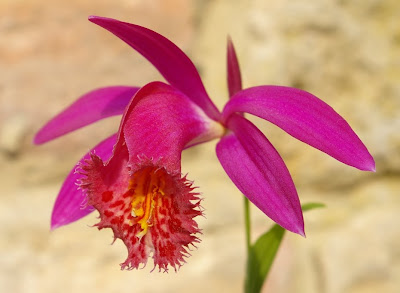 I have been growing Pleione, a genus of almost hardy orchids from the Sino-Himalaya, since the mid-1980s and every spring find myself as enchanted as ever by them. In those days my interest was sustained by the fact that not far from my parents' home is Ian Butterfield's specialist Pleione nursery and National Plant Collection, and it was easy to cycle over there (although on one occasion I had a long walk home with a punctured tyre). Over the years Ian has bred a vast array of hybrid pleiones and is the master of their cultivation, as well as co-author of the standard book on the genus. His latest triumph was to be awarded not only a gold medal but the Lynne Downer Award for the best exhibit in the Floral Marquee at the Malvern Spring Gardening Show last week. The pictures give a sort of idea of the beauty and diversity of his display, but the compact camera was not on good form last Friday... A new acquisition was P. Gerry Mundey 'Tinney's Firs' (bottom pic) whose rich darkness I could not resist.

In general (there are a few exceptions) pleiones are easy to grow, so long as two rules are followed. In winter the dormant pseudobulbs must be kept cool and dry, and in spring watering must be very cautious until the roots are well-developed. Sodden compost at this stage is bad news. Good drainage at all times is essential. In the wild they grow in moss and detritus on trees and over rocks, where the drainage is always perfect. Their growing season coincides with the monsoon or summer rains, so they are regularly soaked but quite quickly dry out again. In cultivation daily watering in summer is desirable, with a nice humid atmosphere; good light but not burning sunshine. My pots get fed once a week in summer with phostrogen at normal strength and they certainly respond to such feeding.

My plants (for example P. Britannia 'Doreen' (first from top), with P. Irazu 'Cheryl' below, are potted in shallow pots in a mixture of woodchips and moss, which provides excellent drainage and aeration for the roots. Ideally one should pot the pseudobulbs in late winter, but mine usually get left until well into spring (other things happen in late winter!). By this time handling needs to be done with care, as the shoot with its enclosed flower bud is developing into something rather priapic, and at its base the roots are beginning to push out (the top picture was taken on 9 April): much better to get them potted before this. The roots push out as the plant flowers: not much leaf is evident at this stage, but as the flowers fade the foliage develops, one (usually) largish leaf per shoot. It stays fresh until the autumn when it dehisces neatly from the top of the new pseudobulb that has formed at its base. Meanwhile last year's pseudobulb has shrivelled away, but usually two or three little pseudobulblets form at its apex and provide a useful method of bulking up the stock. When repotting the vigour of the roots becomes evident, as they form a wiry tangled mass through the potting medium. I store the pots, undisturbed, in a cool shed (cold enough for Dahlia tubers to freeze, in fact) on a shelf out of the reach of mice. Others de-pot and keep them in insulating material in the salad compartment of the fridge.

Many Pleione species and cultivars are evidently rather cold hardy, and some demand a cold rest for successful cultivation, but winter wet is not appreciated, so they need covering with a cloche or pane of glass if being attempted outdoors in this climate. A few years ago I put some spare pseudobulbs into a cavity in a rotting tree stump by the Colesbourne lake and the plants flowered for a couple of seasons, but then mice discovered them and nipped out the buds, so that was the end of that experiment. Although sometimes marketed as 'windowsill orchids' (now a rather superseded term) I would only keep them indoors during their flowering period (as they are now here), returning them to the greenhouse as soon as the flowers fade.
Posted by John Grimshaw at 18:10