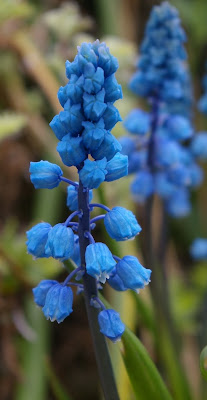 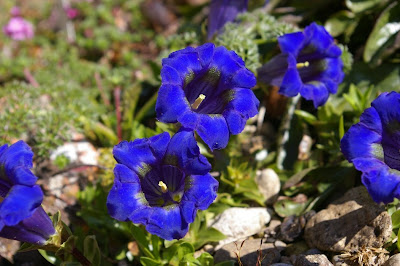 Two strikingly blue-flowered plants are currently in bloom on my rock garden.

Bellevalia forniculata is a Muscari-relative from eastern Turkey, where it grows in large numbers in wet meadows (illustrated in Janis Ruksans' book Buried Treasures). I do not know of any other plant with this intensity of electric-blue coloration and, as Janis says, it is much coveted. But the species reproduces only seed, not vegetatively, so the Dutch bulb merchants aren't interested and I see from the RHS Plant Finder 2010-2100 that there is only one commercial source for it in the UK. These plants have been grown from seed from bulbs originally given to me by Urmas Laansoo of Tallinn Botanical Garden, Estonia, in 1991, which have never produced offsets and seldom produce seed. Bellevalia differs from Muscari in having an open-mouthed flower, and in lacking sterile flowers in the upper portion of the inflorescence. With few exceptions, including B. forniculata, the genus has rather dull and dingy flowers and so has never attained any garden popularity.

Gentiana acaulis, on the other hand, has been a desired garden plant for centuries. Part of a complex of similar Alpine species, it is noted for its large, deep blue trumpets - an emblem both for the Alps and the Alpine Garden Society. Despite its desirability, it has a reputation for being shy-flowering and under-performing: numerous techniques for encouraging it to flower have been suggested over the years, but it may be that different clones perform better than others in different conditions. This plant was rescued from the garden of an old lady in the village who died a few years ago. It is planted in a deep layer of Cotswold ballast (unsorted limestone-derived gravel ranging from sand to pebble in size) above garden soil.
Posted by John Grimshaw at 09:28