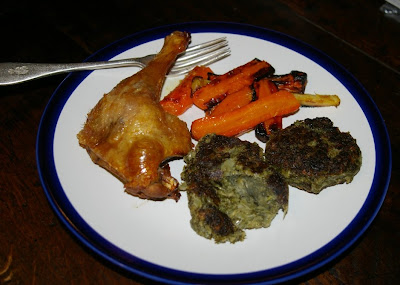 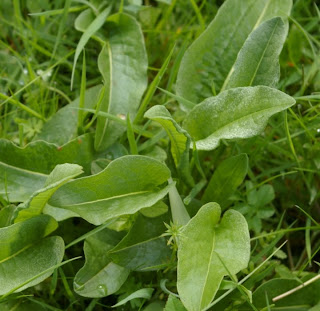 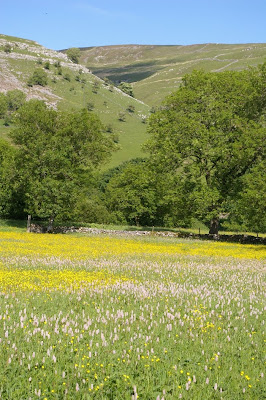 When we were kids we would always spend part of the Easter holiday with my maternal grandparents on the outskirts of Bradford, West Yorkshire. One of the rituals was to go to gather the leaves of Bistort Persicaria bistorta and nettles (Urtica dioica), which my grandmother would then turn into Passion Dock pudding, a local seasonal speciality. Here is her recipe, copied by my mother from Gran's recipe book:

Remove stalks from Passion Dock leaves, add nettles and cover with water for 24 hours then drain.
Mince leaves and all the onions.
Cover with water and simmer for about an hour until water evaporates.
Stir in oatmeal.
Cool. Fry in pats as required.
Traditionally eaten with bacon and new potatoes


In the Cotswolds Bistort is scarce and local, but there is a patch on the side of the lane below the cottage. Seeing it flushing up into growth (middle photograph) I was inspired to try to make Passion Dock pudding - the local name Passion Dock alludes both to its emergence and consumption around Easter, and the dock-like foliage - so we sallied forth and gathered a quantity of leaves. Not a full carrier bag-full, as there are not sufficient plants, but about half. Other ingredients were provided in proportion to this, and the pudding was made last night, for the first time in over twenty years. A few modifications from my grandmother's recipe were necessary: instead of pushing the leaves through an old-fashioned mincer they were whizzed in a food processor; simmering for an hour seemed too long, so I drained it off when everything was well-softened; there is no mention of seasoning, presumably as my grandmother never cooked anything without generous salting, so would not have thought that worth noting - I added salt and plenty of black pepper, and then there was the question of what to fry it in. Olive oil seemed anachronistic - if there was olive oil in the house in my youth it was for soothing earaches - and I suspect Gran used lard... The compromise was goose fat, and it didn't take long to seal off the tops of the patties. They were served with roast duck legs and orange-glazed carrots, and were pronounced delicious, if delicate in flavour. With the oats and onions I was put in mind of a herbaceous haggis, but this doesn't do it justice.

Bistort is essentially a plant of upland meadows,, now eliminated from much of its range by agricultural improvements, but where farming is less intense, as in the Yorkshire Dales, the flowering display of its pale pink spikes can be impressive - as here in Upper Wharfedale, June 2008.
Posted by John Grimshaw at 10:59