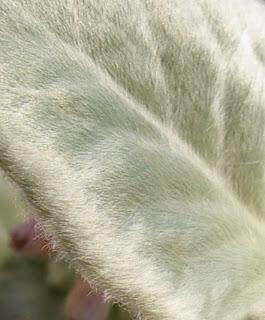 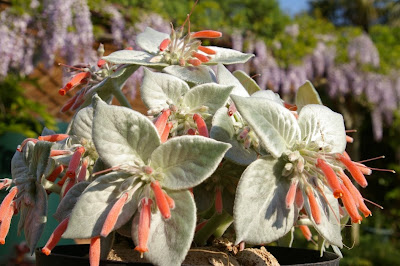 Among many good plants currently flowering in my parents' garden is this outstanding plant of Sinningia leucotricha. I don't think I've ever seen a specimen of this species looking so good, with so many shoots in perfect condition.

This is a Brazilian plant and is often given the English name Brazilian edelweiss, on account of its densely silvery-hairy leaf rosettes, which give an edelweiss-ish look as they emerge, but I learn from an online search that its Brazilian name is Rainha do Abismo, Queen of the Abyss. This ominous-sounding name presumably comes from its natural habitat of cliff faces in the state of Parana. Although many members of its family (Gesneriaceae) are generally thought to like equable moist conditions, an equally large proportion are very well adapted to seasonally dry conditions in various ways. Some, like the sinningias and their relatives, have a tuber that may be subterranean or at least partially exposed (just visible in the lower image here), while others have the capacity to lose moisture from their foliage without causing irreparable damage and then rehydrate when moist conditions return. Such 'poikilohydry' is evident in even European gesneriads such as Ramonda and Jancaea, which can become very wizened on their rocks, but is also common in the familiar African houseplant genera Saintpaulia and Streptocarpus. In Sinningia leucotricha the large tuber (or caudex, as succulent enthusiasts would call it) will tide the plant through awkward periods of drought on its cliffs, even in the growing season, while the hairy leaves are also an adaptation to a potentially dry habitat.

The red tubular flowers indicate that in the wild they would be pollinated by hummingbirds. After they fade the foliage expands and becomes considerably larger and less silvery. It persists through the summer, then each shoot is shed from the tuber as a unit, leaving the tuber to sit out the winter as a naked carapace. The pot is stored cool & dry under a bench in the conservatory, being brought out and watered when growth starts in spring. I would not describe it as being hardy, but I have heard of plants tolerating a light frost if dry in dormancy. The plant is best propagated from its minute seeds: they need care but will grow quite quickly and soon form a small tuber.
Posted by John Grimshaw at 15:11