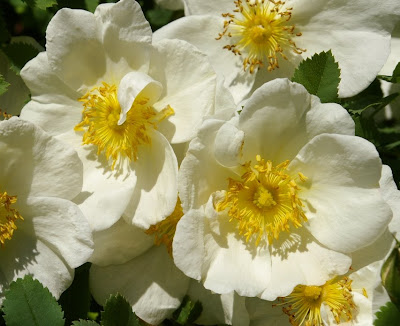 In his contribution to the posthumous 'auto'biography of Henry John Elwes, Gardening and horticulture: personal impressions and recollections, E.A. Bowles wrote of plants he had seen growing at Colesbourne during HJE's lifetime, leaving us with a tantalising glimpse into the richness of the garden in those days.  One of the plants he mentioned was  'a wide stretch of a very good seedling form of Rosa spinosissima altaica, called after Mrs Elwes - its white flowers are large, and I think contain more than the five petals of the older form'. Bowles was writing seven years after Elwes's death, so it is not surprising that he was slightly hesitant about details. I have not been able to locate any other mention of a rose named after Mrs Elwes, nor have rosarians I have asked heard of such a thing - this brief mention is the only description we have. 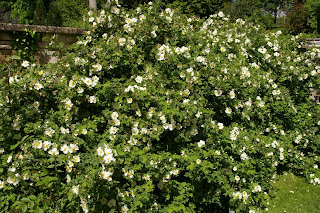 However, I think we still have the rose, which is currently in full flower and wafting its strong scent around. It is a lovely, vigorous plant, suckering freely as all burnet roses do, and for a short time bearing masses of large creamy-white flowers. Many do have one or two extra petaloids in the centre, supporting Bowles's memory and suggesting that this is indeed the original 'Mrs Elwes'. Its drawback is its short flowering period, but this no shorter than many much-admired early shrub roses, and a few flowers appear through the summer. 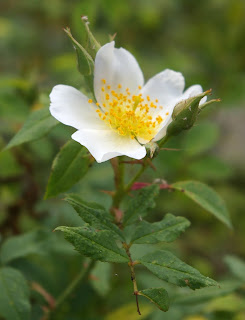 The other two roses are much less attractive and both are grown in the polytunnel for protection against the worst of the winter. Rosa abyssinica is a big prickly 'dog rose' with smallish white flowers that are at least pleasantly scented, and have a profusion of golden anthers. It would be of limited horticultural merit even if hardy, but when I tried it against the cottage wall here it was killed to the ground each winter. It is, however, of great botanical interest, as it is the only rose native to sub-Saharan Africa, occurring in the Ethiopian highlands and the mountains of Yemen across the Bab el Mandeb, a distribution paralleled by Primula verticillata and a few other plants. In the wild it grows on dryish banks and forest edges, scrambling about through other shrubs and trees. When I last saw it in the wild, in Ethiopia in 2007, I was amused to see it showing the unmistakeable black spot fungus that plagues rose growers here. The plant here, however, is of Yemeni origin.

Thirdly comes the most miserable little rose I've ever seen - any bramble could show a finer crop of flowers than this Rosa x beanii. I got cuttings of it from Jimi Blake of Huntingbrook in Co. Wicklow, seduced by its narrow leaflets - the foliage is light and feathery in appearance, but always rather chlorotic-looking here- and the name, though now I'm not even sure if it commemorates the great William Jackson Bean, he of Trees and Shrubs Hardy in the British Isles. It seems to be a hybrid of uncertain ancestry, but Rosa banksiae seems to be in the mix. An old garden rose known as 'Anemoneflora' with white double flowers is also attributed to R. x beanii. Another plant grows against my hen run here, but has never flowered and looks even more yellow than the potted specimen, but it was not harmed by the winter.
Posted by John Grimshaw at 19:41