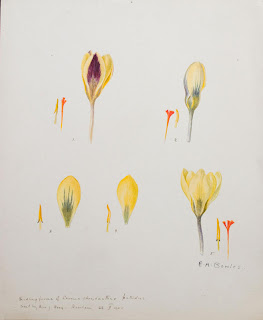 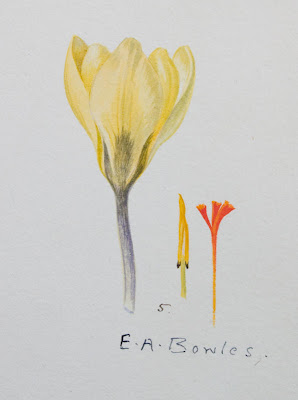 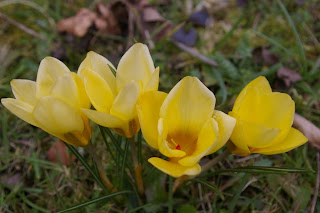 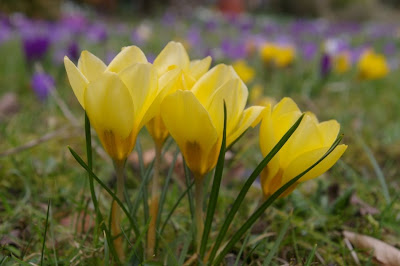 A long-running debate among croconuts has been the apparent disappearance from cultivation of Crocus chrysanthus 'E.A. Bowles', a circumstance greatly regretted by those who cherish the memory of the great plantsman.

In My Garden in Spring (1914) Bowles described the moment he first set eyes on the plant: 'The 22nd of February 1905, stands out as an event in the Crocus world for me, for a little packet post-marked Haarlem lay on my breakfast table, and had brought me five blooms from Mr. Hoog of C. chrysanthus pallidus seedlings which for size and delicious creamy moonlight yellows surpassed anything I had dreamt of. One had a band of deep purple on the outer segment, another greenish-blue feathering, and the largest of all was as soft a yellow as the pat of butter in front of me, and with a feathering patch of warm brown-madder at the base of each segment that set off the yellow in much the same manner as the apical patch of brownish black does on the forewing of the lovely Pale Clouded Yellow Butterfly. My admiration of this new race went to Holland by return of post and had a pleasant sequel in a generous gift of corms of these varieties and the naming of the butter-coloured giant after me.'

Having written his thank-you letter, he promptly painted the five flowers on a sheet now preserved in the Natural History Museum (copyright Andrew Parker Bowles) and reproduced here thanks to Roger Holland, with a detail of the flower of 'E.A. Bowles'.

Roger Holland, erstwhile Chairman of the E.A. Bowles of Myddelton House Society and holder of the National Plant Collection of Crocus chrysanthus and C. biflorus cultivars on behalf of the Society, has been trying to track down material of 'E.A. Bowles' for years, with a conspicuous lack of success. Material received has always proved to not match the description and images available of the cultivar, even when of apparently reliable provenance. This is odd, considering that until comparatively recently, 'E.A. Bowles' was offered in bulb catalogues at very cheap prices. In the back of my copy of Bowles's A Handbook of Crocus and Colchicum for Gardeners I note that I acquired corms of 'E.A. Bowles' from the bulb merchant Jacques Amand (then with premises in Beethoven Street, London), in 1984. Sometime after that, though, it disappeared from the trade and apparently from gardens too.

On Tuesday morning, while recuperating from my flight from Portland at my parents' in Maidenhead, I noticed a fine yellow Crocus chrysanthus in the lawn (planted with a diversity of Crocus in 1991, and now better than ever) and immediately connected it with my mental image of 'E.A. Bowles' from 25 years or so ago. I took photos and a flower to send to Roger; studying these he has come to the view that this is indeed the long-lost 'E.A. Bowles' and considering the similarity between the current flowers and the exquisite painting one has to agree.

So why has this once commonly grown plant diminished to this state of obscurity? It seems that even in Bowles's lifetime commercially grown stocks were muddled with other clones (teste a letter from EAB to Dick Trotter, 1943) and presumably by the mid-1980s it was felt that it was no longer a viable crop for the Dutch growers - or possibly grower. There is a parallel case in Iris histrioides 'Major', once a common and cheaply available bulb, but which was only produced by a single grower whose stock was one year afflicted by virus and so it disappeared from the trade. Nobody particularly worried about maintaining such 'common' and 'easily available' plants until it was too late and they had all but died out of gardens, proving the validity of the concept of National Plant Collections. A corm or two of 'E.A. Bowles' will find their way to Roger Holland later in the year.
Posted by John Grimshaw at 17:46