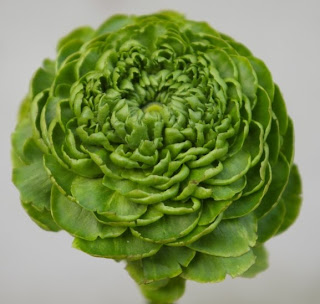 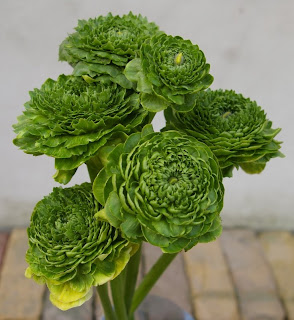 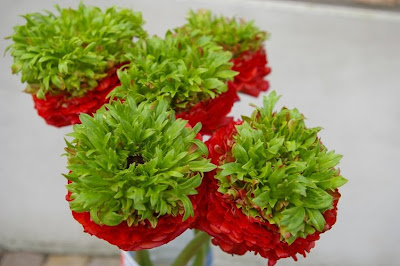 In Amsterdam on Sunday our route to the Rijksmuseum 'somehow' took us past the flowermarket on Singel. In one of the florist's shops I noticed bunches of some extraordinary Florists' Ranunuculus, in which some or all of the floral parts were foliose (i.e. converted into leaf-like structures). This is not uncommon in the Ranunculaceae (as evident in the Eranthis post) and I have occasionally seen it in Florists' Ranunculus, but never so well developed as in these cases. The most striking had several whorls of red petals surmounted by a tufted of lobed leaflets, while two others had different forms of completely foliose flowers that for anyone fond of green flowers, as I am, were quite irresistable. Unfortunately I did not have a camera with me, so we had to return later in the day to buy bunches for photography. At that point we found that they were only sold in huge bunches of 50 stems for 5 euros per bunch... As 150 mutant Ranunculus were too many to cope with I bought only the two most remarkable. It seems that they are grown in Italy, as clonal plants, for the cut flower market, but I wish I could get hold of tubers to grow here.
Posted by John Grimshaw at 20:33