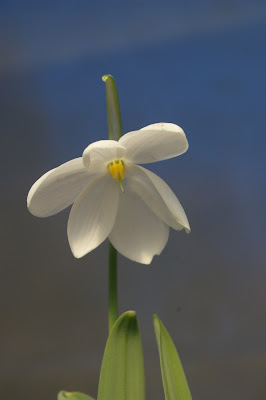 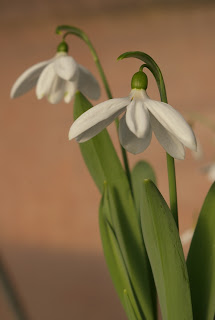 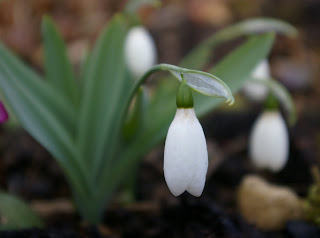 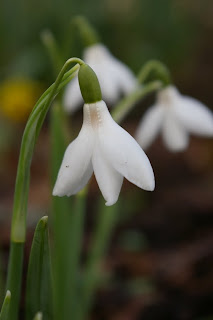 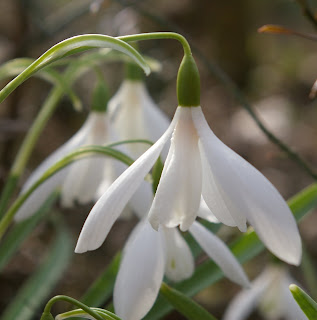 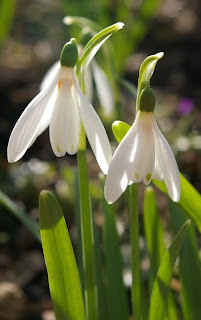 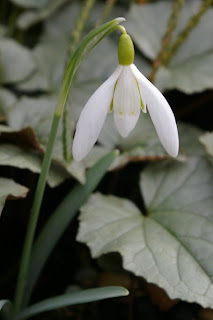 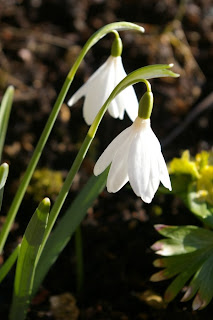 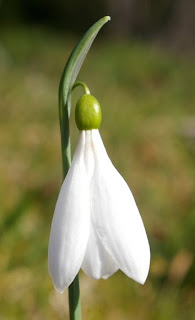 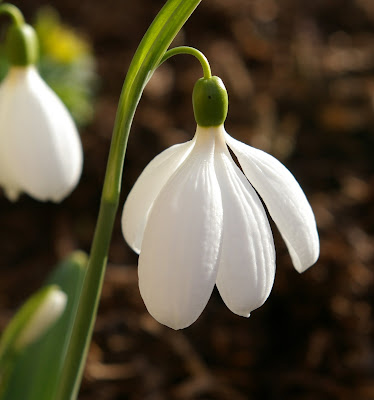 My favourite group of aberrant snowdrops are those with entirely white flowers, caused by the replacement of the normal inner segments with an extra whorl of outer segments. Ideally this should be a perfect replacement, resulting in six equal, pure white segments, but occasionally this is not quite fully achieved. This flower type is known as poculiform, a strange word that derives from the Latin poculus, a little cup: I always think that the Revd. Harpur-Crewe, who coined the name 'Poculiformis' for a G. nivalis clone, was showing off his dog-Latin. This form of variation is not particularly uncommon and since it is impossible to keep track of all the poculifom clones of G. nivalis, we placed them all in a Poculiformis Group in our book Snowdrops. The group is defined by having elongated inner segments resembling outer segments in shape, not by purity of whiteness, as green marks can still occur in such flowers.

The first three pictures show three clones of poculiform Galanthus elwesii, in order: 'Don Armstrong' a shapely clone named after a gardener from Vancouver; another Canadian clone, as yet unnamed, with less perfectly shaped flowers but great vigour (but this is not the same as 'Snocus', which has still not been released by its originator, and 'The Bride', Phil Cornish's discovery which for many years has been the only poculiform G. elwesii around. It is not a robust plant and has weak scapes, causing the flowers to sag close to the ground, but it is a myth that needs a hot dry place to succeed.

The fourth picture shows a lovely example of G. nivalis Poculiformis Group sent to us at Colesbourne by Lord Forteviot: it has particularly shapely flowers that never seem to show any green markings. Below it is an imperfect poc from Colesbourne - the inner segments are elongated, but don't equal the outers, and they have a trace of green honey guides on them. By virtue of its elongated inners 'Angelique' counts as poculiform, but in this case they are intermediate in morphology, showing an apical mark and notch. More even are plants such as 'Alan's Treat' (not illustrated) in which all six segments have green tips. I think these have to be admitted to the poculiform fold on the basis of their morphology, broadening the concept away from pure white flowers.

The next (seventh) picture is not a poculiform flower, however, but what is known as an albino, having almost pure white flowers but of normal shape. It is G. nivalis 'Snow White's Gnome', from Wolfgang Kletzing. Only the tiniest of green dots show on the outer surace of the inner segments, but the green honeyguide lines inside are normal. It is a tiny plant, and like most Czech snowdrops, very late to flower.

The only poculiform hybrid (nivalis x plicatus) I know of is 'Bridesmaid' (eighth pic). It seems to be vigorous and has a nice flower shape.

Galanthus plicatus has also produced poculiforms, though they are still few in number. The penultimate image shows 'Seraph', which has had an angelic resurrection since being proclaimed extinct in Snowdrops. It is pretty but has a slightly droopy flower shape that makes it impossible to confuse with 'E.A. Bowles', seen in the final image. This is indisputably one of the finest of recent discoveries, originating a few years ago at Myddelton House. It has achieved some notoriety as the most expensive listed snowdrop, being offered (and selling) for £150 by Monksilver Nursery. So far it seems to be vigorous and a good doer, with broad leaves and flowering late in the season.
Posted by John Grimshaw at 07:21