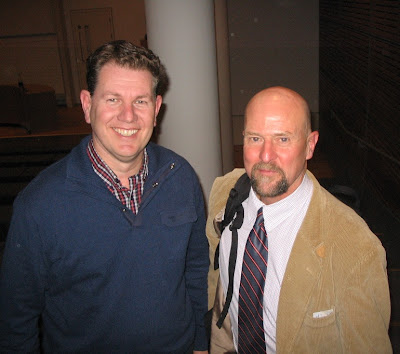 On Wednesday Harry spoke to the the Oxford & District Alpine Garden Society Group about the expedition by jeep from Chengdu in Sichuan over the mountains to Lhasa that he organised and led last year. Having travelled with Harry in Ethiopia and Kenya I knew we would have a fantastic talk, and so it proved, with stunning images of plants, people and 'incidents' along the way. Having travelled extensively in western China and the Tibetan borderlands over many years, but while safely ensconced in my armchair, many of the plants were at least somewhat familiar to me, but to see images of great swathes of Meconopsis baileyi and mountainsides of Rheum nobile was a delight. In addition, however, Harry showed us many pictures of unheard of gentians and tiny delights such as Silene davidii with large pink flowers that have never adorned the alpine house or rock garden.

Dan's talk on Thursday, as part of the University Botanic Garden's lecture series, was quite different, looking at plants that have won his approval, or caused disappointment, in the garden at his home Windcliff, set on a bluff above the Puget Sound with views to Seattle and Mount Rainier beyond. It is a stunning setting, but the location has its challenges; not only is it windy but it is in the rain shadow of the Olympic Peninsula and thus comparatively dry. One of the most amusing images was of Gunnera manicata with its fading leaves spray-painted silver and blue and looking rather stunning. Interspersed with the 'stills' were video clips, including one of Dan on the trail of Tetrapanax, whose suckering habit he deplores. The garden at Windcliff has been created within the past decade and is sure to be hailed as one of the inspirational gardens of the twenty-first century by many in the United States and elsewhere.
Posted by John Grimshaw at 18:54