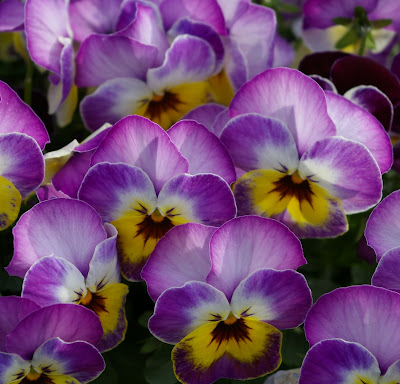 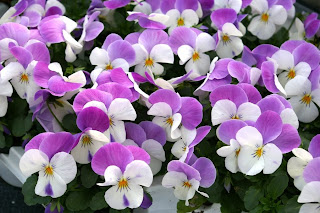 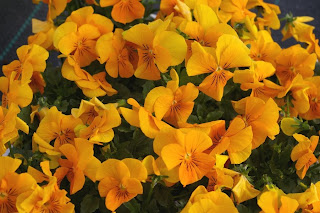 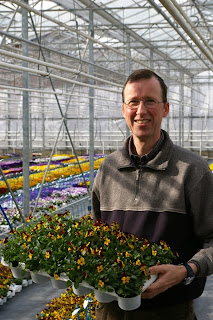 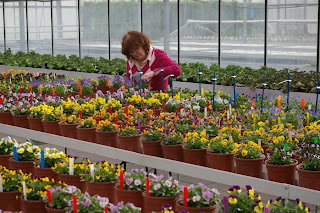 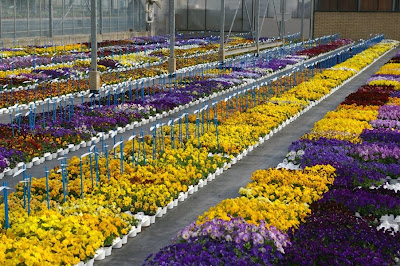 On Monday morning we spent two happy hours looking round the nursery of the seed company K. Sahin, Zaden B.V. (www.sahin.nl), for whom I used to work. The nursery is located in Honselersdijk, part of the Westland district, an extraordinary proportion of which is covered by glasshouses - see http://maps.google.co.uk/maps?ie=UTF-8&hl=en&tab=wl - growing everything from anthurium to aubergines.

The principle feature of interest at this time was the viola breeding trial, a visual and olfactory spectacle that we were shown by Diony de Bont, the company's senior breeder. Each year he sows out thousands of individual 'lines' of viola seed - some are varieties already on sale, being checked for purity; others are experimental breeding lines nearing perfection; others are test crosses between potential parents, and some are the parent lines from which the F1 hybrids are produced. It is a huge undertaking, of great importance to the company, and it is attended to with meticulous care by nursery manager Jaap Grosscurt and his team, so that the plants perform to their highest potential. Each line is observed and evaluated by Diony before he takes out any promising looking plants for experimental breeding work, or selects sets of parents for pollination; a team of five ladies led by Janny Haak works at this. When, eventually, a hybrid is selected for the catalogue, the ladies will produce enough stock seed for a crop of the parents to be grown in China, where the hybrid seed will be produced. It is sold to commercial growers rather than amateur gardeners, so the availability of these cultivars does depend on whether a local nursery is using Sahin products.

I had not seen the Sahin viola trial since 2003, when I returned to the UK and the improvements in quality seen now are dramatic, with a new series called Floral Powers being outstanding. These are tuft-forming, free flowering plants in many dfferent colours that are often unique in bedding violas; they are rightly winning high praise in the industry. The aim of producing a series is to have all the different flower colours on plants that are as uniform in habit and flowering period as possible, enabling effective growing and marketing. This is a huge challenge and many otherwise excellent lines are abandoned because they don't quite conform to the requirements for the series, but some colours are tricky to achieve to these standards - orange, for example, and red is very difficult in bedding violas for some reason, but there are excellent examples of both in the Floral Powers series.

The definition of bedding violas is becoming difficult: they are always of a smaller size than a traditional pansy, and used to have a distinctive look derived from the wild Heartsease Viola tricolor original parents, i.e. four larger petals above the lip, usually with the two uppermost being larger and often darker in colour than the rest, while pansies are traditionally much rounder in shape, with less differentiation in size between the petals. Some bedding violas retain the Heartsease shape but others are tending to look more like small pansies. Not that it matters because they are all lovely plants, and really much more useful in the garden than ordinary pansies.
Posted by John Grimshaw at 16:35