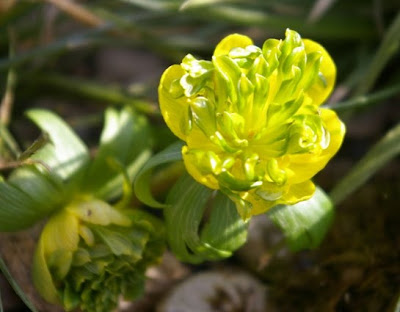 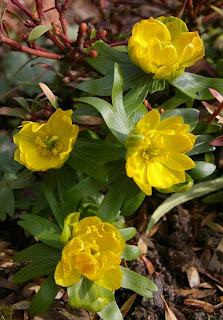 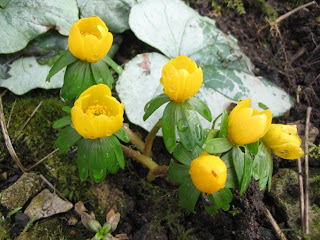 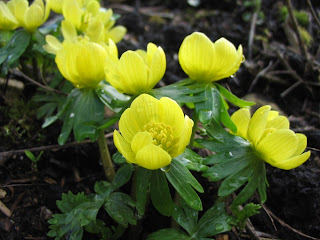 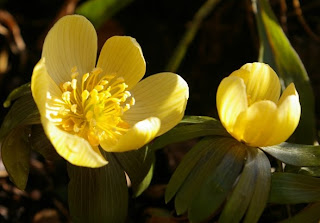 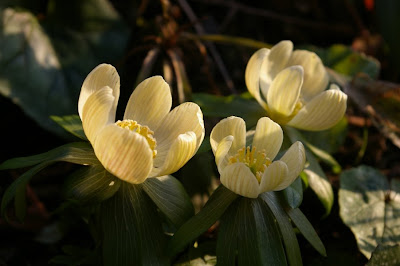 Eranthis hyemalis, the Winter Aconite, is one of the most welcome sights of early spring, enlivening the garden with its typically bright yellow flowers. In some places here at Colesbourne they are still fresh and in full beauty, which is remarkable in mid-March. In other areas they are beginning to fade, however.

Along with a few other galanthophiles I have a collection of different forms of Eranthis hyemalis, some of which are illustrated here. At the top, just coming into full beauty, is an extraordinary clone in which the anthers are replaced by foliose structures, rather as they are in some Japanese Hepatica cultivars - an as-yet unnamed rarity very kindly shared with me by a friend last year. Several doubles are now known, of which Joe Sharman's selection 'Lady Lamortagne' is much finer than the more frequently seen 'Noel Ayres' (not illustrated). 'Orange Glow', when fresh, is a particularly rich orangy-yellow. It comes true from seed - my plants are derived from some seed kindly sent by Mat Murray from Australia. Conversely there are several seed-raised selections in which the flower colour is paler than average. 'Zitronenfalter' (not illustrated) is a German selection with lemon-yellow flowers, and is not very distinguishable from 'Lightning', shown here, which was found in an old garden in Philadelphia by Carol Lim some years ago. It comes more or less true from seed, but darker versions need to be rogued out, and it also has the pleasant habit of sometimes producing doubles in the same colour. My favourite of the paler aconites is 'Schwefelglanz', also from Germany. It opens a rich soft apricot (penultimate picture) and fades through straw to ivory as sen in the final image.
Posted by John Grimshaw at 18:54