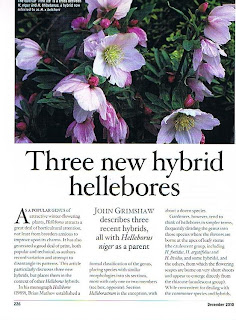 The December issue of The Plantsman arrived this morning. As usual its pages contain a diversity of fascinating articles, including a discussion of the Chinese botanical drawings collected by John Reeves that I wrote about last year that is of particular interest to anyone interested in the history of plant introductions or botanical art.

My contribution to the issue is an article about hybrid hellebores, reviewing the history of hybridity in the genus and focusing on the role of H. niger as an important maternal parent. In it I formally described three crosses for the first time, establishing a scientific name for each that will cover all progeny from these parents wherever and whenever they may occur again. There is a history in Helleborus of naming hybrids to commemorate their breeders or those associated with them: H. × sternii, H. × ballardiae and H. × eric-smithii are familiar, H. × lemmonierae less so; the epithets for these new hybrids continue the tradition. Two have been around for several years, one is so far almost entirely unknown.

H. × belcheri is the new name for the hybrid between H. niger and H. thibetanus, best known under the cultivar name 'Pink Ice', raised by Ashwood Nurseries and first exhibited in 2001. It commemorates Kevin Belcher, hellebore breeder at Ashwood, who has done so much to develop hybrids in the genus, and who was the first person to make this cross. Its pale pink flowers are very pretty.

The same nursery is commemorated in H. × ashwoodensis in recognition of the development of the genus there. This is the plant first exhibited in 2002 as 'Briar Rose', H. niger and H. vesicarius, the oddity from Turkey that goes dormant in summer. The resulting plant is rather remarkable, not really resembling either parent, but extremely decorative when well grown. Both of these have been available for several years from Ashwood.


The third, H. × sahinii, is the very unexpected hybrid between H. niger and H. foetidus, raised by my former colleagues at K. Sahin, Zaden B.V. in The Netherlands from a cross made in 2004. It is named in commemoration of the late Kees Sahin, founder of the company, who had a great love of anything unusual or somewhat bizarre, and this plant seems to fit that description. Its pale, greenish-white flowers are not unattractive, and are frely produced on larger plants, but it has the habit of flowering at odd times; this photo was taken in the cottage garden here in August. It will be sold under the cultivar name 'Winterbells' when released to the market in the near future.
Posted by John Grimshaw at 19:12