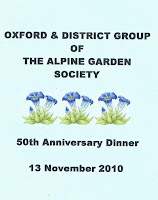 Last night the Oxford and District Group of the Alpine Garden Society celebrated its 50th Anniversary with a splendid dinner, held at St Margaret's Institute in Oxford. Val Lee, President of the AGS, Christine McGregor, the Society's Director, and Jim McGregor, its Webmaster, joined 40 members to hear Brian Mathew speak on his choice of 'Plant of the Month'. This was a model of what a talk should be; interesting, amusing and well-illustrated, and above all, brief and to the point. It is not surprising that Brian has been the Group's most popular speaker over the years, having addressed us six times since his first talk in 1964, on Daphnes.
The Group was founded in October 1960, holding its first meeting the following month, when Roy Elliott gave a talk illustrated by colour slides, evidently a noteworthy point in those days. As Bryan Wardley, our current Chairman, reminded us last night, the group has had a number of eminent and well-known members over the year, including the late Valerie Finnis, Winton Harding, Maurice Rogers, Bill Baker, Primrose Warburg and Richard Nutt, and has played its part in the affairs of the main Society. While missing them and reminiscing about them, it was great to be able to celebrate the fiftieth anniversary yesterday in the company of so many current members and old  friends.
As a group we now meet for a talk six times a year between October and March, and arrange a programme of garden visits and social occasions during the spring and summer - posted here. We're always delighted to welcome new members and visitors, so if you would like to come to one of our meetings or events, please get in touch.
Posted by John Grimshaw at 18:44