The first buds on Galanthus plicatus subsp. byantinus 'Three Ships' 'popped' overnight and the flowers are hanging down; it will probably be a few days before they have matured enough to open. It counts as being in flower, however, and this is about the earliest date I can recall 'Three Ships' being out. When it was found by John Morley in 1984 it was reliably Christmas-flowering, gaining its name from the well-known Christmas carol 'I saw three ships come sailing in.' Since then, however, and especially in the past decade, it has seemed to flower earlier and earlier, moving from early December into November. Whatever the cause, this makes it a particularly valuable late autumn plant; being vigorous and robust it quickly makes a large floriferous clump that is very welcome at this time of year. 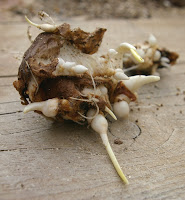 In July I wrote about a huge bulb of Galanthus elwesii 'Natalie Garton' that I'd lifted for propagation. At the same time I found a similarly sized bulb that had been hollowed out by the larva of the Large Narcissus Fly in the previous year, leaving only the shell of bulb scales behind.  These were still alive and showing signs of  making adventitious buds, so I popped the whole thing in a bag of just-moist vermiculite, as for twin-scales and left it for the summer. Potting up the season's twin-scales recently I found that this bulb had indeed been keen to propagate itself, producing a mass of bulbils from both the lower edge of the scale and its 'flanks'. The theory behind the practice of propagation by twin-scaling is that a bud develops in the axil of the scale fragment (a modified leaf) and the piece of basal plate (a modified stem) to which it is attached, in concordance with the principle that there is always a bud in the axil of a leaf and stem. In 90% of snowdrops this is what happens, but there are some cultivars in which adventitious buds develop on the surface of the scale as well, and in these it is immaterial whether there is any basal plate attached. The phenomenon needs more careful study, but it is evident thsat when it works it is a useful survival strategy; from one bulb we will now have a couple of dozen to flower in two or three years' time. For once the Narcissus Fly has done us a favour!
﻿
Posted by John Grimshaw at 18:03