Fruits to Gladdon the eye

Iris foetidissima is the sort of plant that I can't imagine fashionable garden designers ever even thinking about, though I hope I'm wrong on that. In a genus noted for its flowers its floral display is dowdy, with rather inconspicuous pale greyish-blue or pale yellow flowers in June or July, and the leaves do live up to its unencouraging specific epithet when rubbed or damaged. On the other hand it has some excellent qualities, notably its tolerance of dry shade - very dry, very shady shade; evergreen foliage (with a handsome variegated form 'Variegata' and another with golden leaves 'Aurea', though I don't feel an urge to grow that one); and, above all, its fruits in winter. The flowers quickly give rise to rapidly swelling green capsules that usually become pendulous with the weight of seeds within, and as autumn progresses into winter split along their corners to reveal rows of bright orange seeds that shine in the low sunshine (as those illustrated above were doing today). These can persist for several months through the winter, making a really useful contribution of colour and interest to the garden. It was notable, however, how quickly they were taken by birds in the severe weather last winter, demonstrating what must be the evolutionary reason for the bright berries - dispersal by birds. 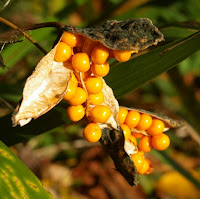 Although the normal bright orange-fruited forms are most commonly seen, two other colours are available. The so-called yellow-seeded form (it has never had any formal name) has paler orange seeds that are also attractive and conspicuous (right) and nice to see, but it is not a substitute for the typical bright orange. Interestingly, there seems to be no correlation between fruit colour and flower colour: the flowers of this (as grown here) are typical grey-blue, while the yellow-flowered 'Picos Yellow' has bright orange seeds.
﻿﻿ ﻿﻿
An excitement for me this autumn was the first fruiting of the white-seeded form 'FructuAlbo', whose pods started to open in October to reveal the pure white seeds inside. They were very striking against the dark leaves in a shady spot - the past tense is used deliberately, as I've given away some, and have sown the rest as I didn't want to feed the birds with them and think I can use a mass planting of it somewhere. The history of 'FructuAlbo' history is interesting: it not mentioned by any of the usual sources of information on curious variants, and in the first edition of Brian Mathew's book The Iris (1981) he says that he had not seen either the white- or yellow-seeded variants. He recounts that 'FructuAlbo ' was first found in 1921 by one Mary Ellen Shedden of Bridgewater, Somerset, in a hedgerow amongst normally coloured plants. By the next edition in 1989, however, he was able to report that the Iris species enthusiast Anne Blanco-White had managed to find material and introduce it to a wider audience.
I have always known the plant by its vernacular name Gladdon, derived from the Old English glaedene, and ultimately, like Gladiolus, from the Latin gladius, a sword, in reference to the leaf shape. With this history in the name it is unfortunate, therefore, that the standardised English name, is the rather boring, though not new, Stinking Iris.
Posted by John Grimshaw at 20:08