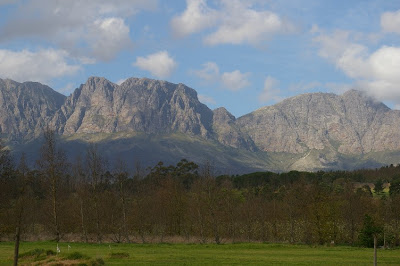 For several years I have been familiar with the name Vergelegen through its appearance on bottles of reliably good wine. With the enthusiastic endorsement of Hugh Johnson wearing both his oenological and horticultural hats, we took the opportunity yesterday to visit this historic estate, lying in a beautiful well-watered valley below the Helderberg and the Hottentots Holland mountains near Somerset West.
Vergelegen means far-flung, outlying, in reference to its position at the edge of the Dutch colony at the Cape, a day's travel from Cape Town when it was established in 1700. Its creator was Willem Adriaan van der Stel, Governor of the Cape, who built a farmstead and brought a large tract of land into production. To do so, however, he appropriated Dutch East India Company resources, including slaves, and this led to his dismissal from the Governorship and recall to Holland in 1708. In punishment, too, the destruction of Vergelegen was ordered from Amsterdam, but it seems that this was not carried out very assiduously. 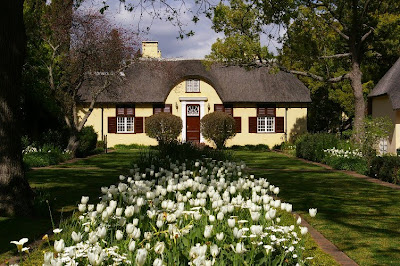 Although the current house is on the site of the original its traditional Cape Dutch appearance is an early Twentieth Century creation. Traces of van der Stel's occupancy remain, however, in the shape of an octagonal walled garden (reflected in the labels on the wine bottles), and a row of magnificent camphor trees (Cinnamomum camphora) with wonderfully bulbous bases. There's also an ancient White Mulberry, said to be a relic of his attempt to establish silk production at the Cape. 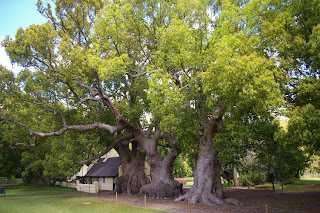 W.A. van der Stel's camphor trees
A succession of owners left their mark on the place, including the mining magnate Sir Lionel Phillips and his wife Florence. Sir Lionel converted a former wine cellar into a library for his book collection, which remains there today - an intensely covetable room. 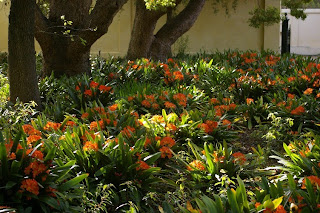 Clivia miniata under camphor trees
Vergelegen is currently owned by Anglo-American Farms, who have invested heavily to restore its previous glories, especially in the production of superb wines. The Vergelegen Red illustrated is their flagship red wine, in Bordeaux-style - a superbly smooth production of great character. The house and grounds are beautifully maintained. The garden seemed rather soulless as a whole, but there are some lovely horticultural features: drifts of white tulips with Zantedeschia under newly-emerging oak leaves; masses of Clivia miniata under camphor trees; a fine herb garden and of course the old trees, including an immense Yellow-wood, Afrocarpus falcatus. They are proud of their Camellia collection, which certainly suggests opulence in the Vergelegen tradition, and although it was nice to see C. reticulata cultivars flourishing I'm not convinced that they're appropriate in a Cape garden. Extensive rose gardens promise a lush display later in the year, but now are only coming into new growth. 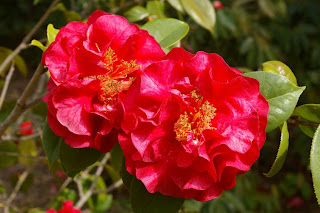