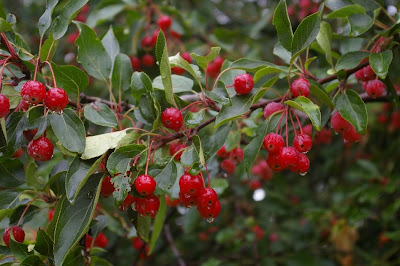 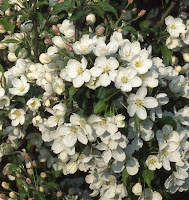 The RHS Woody Plant Committee had a day at Kew today, studying ornamental crabapples. There are about forty species in the genus Malus, with fruits varying in size from scarcely larger than the head of a map pin in M. sieboldii, to the largest edible apples. The fruits were the focus of today's interest, as the foliage has yet to colour-up -  another sesssion is really needed to look at the blossom. The morning session was led by Nick Dunn of the nursery Frank P Matthews, Trees for Life, of Tenbury Wells, Worcestershire, whose interest in crabapples developed from their use as pollinators for commercial apple orchards. He has become a champion of them, keen to promote the planting of cultivars other than the standard handful that dominate the trade. We looked at a wide selection of samples he had brought, and heard his (and others') comments on their qualities. Interestingly, he has a very low opinion of the well-known trio 'Golden Hornet', 'John Downie' and 'Profusion', principally on the grounds of their low resistance to disease; his two favourites are 'Jelly King' for fruit (already fallen and converted into jelly at his nursery, so we didn't see this one) and M. brevipes 'Wedding Bouquet' for flower (thanks to Nick/Frank P Matthews for the use of this image, above right). Here at Colesbourne it is proving to be a very pretty, free-flowering tree, producing its almost pure white flowers in great abundance. 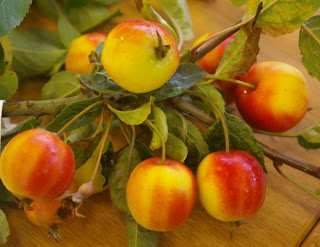 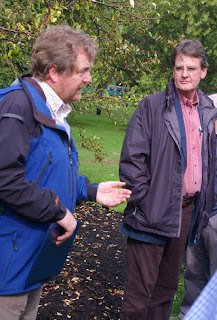 In the afternoon we were shown round the Kew collection of Malus ﻿by Tony Kirkham, Head of the Arboretum. Many are much less spectacular than the cultivars, but are of great interest nevertheless, and there was a lot of discussion about the variability of several species, especially M. yunnanensis and M. baccata, comparing the Kew specimens with samples brought in by participants.
Many thanks to Tony (left) and Nick (right) for making this a really interesting and informative day.
Posted by John Grimshaw at 22:03