Calling for tea at my parents' this afternoon, my mother was quick to point out the first snowdrop of the season, a self-sown Galanthus reginae-olgae in the Cyclamen plunge-bed of the alpine house, which had just popped its bud. Having been away I haven't been in touch with the galanthophile network, so don't know when the first snowdrop of the year was reported, but this was the first I've seen. The pleasure in seeing the first r-o of the year is always slightly muted by the thought that it heralds the onset of winter.

Also flowering well, whether in pots or loose in the sand plunge, was Narcissus miniatus (below), the Eastern Mediterranean plant usually known as N. serotinus (this name is now used for more westerly populations). It's a charming little plant, flowering as soon as moisture is provided in September, and producing a flowering stem (scape) that also does duty as foliage, producing the carboydrates needed to replenish the bulb. It soon goes to seed, and unless caught in time this scatters all over, resulting in abundant interlopers. These grow well, but the bulb is very slow to multiply vegetatively, if it ever does. I have never attempted to grow it outside, but suspect that it would need a very warm sheltered site. 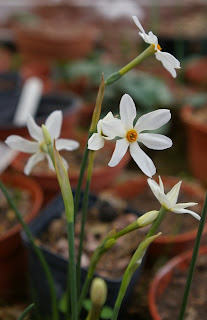