Yesterday we travelled up the coast to visit the Durban Botanic Gardens, which claims to be the oldest surviving botanic garden in Africa. It dates its foundation to 1849, when it became one of the network of gardens established throughout the British Empire to foster agricultural development and advance scientific knowledge. Its first mission was to grow plants with economic potential, and only later did it develop as a collection of more botanical interest. 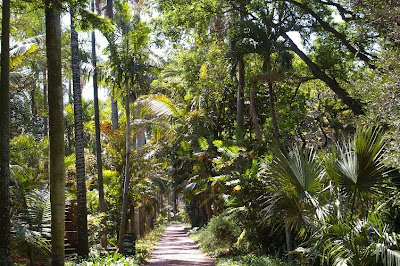 The palm walk
The result is, on a site of only 15 ha in the middle of the city of Durban, a compact and beautiful garden, with fine lawns and mature trees in the best botanic garden tradition. It is however, a city park rather than part of the South African National Botanic Gardens network, and admission is free. The current drought meant that we did not see it at its verdant best, but it is generally well maintained. The most serious deficiency from the point of view of a botanical visitor was the high proportion of missing labels, which was often rather frustrating, especially when so many plants are unfamiliar.

There are four major collections in the garden; bromeliads, though most are unlabelled; orchids, including an immaculate and magnificent display in the orchid house;  palms (see top picture), of which there is an impressive array of both mature and younger specimens, and cycads, with broad plantings of both native and alien species. These, unfortunately, were unlabelled, with one exception, the original collection of Encephalartos woodii. The plant was found by, and bears the name of, John Medley Wood, curator of the gardens 1882-1913 (left). He found a solitary male specimen in Zululand in 1895, growing as a tuft of stems: but this was the only specimen ever located. Stems were brought into cultivation over the years until none remained in situ, so the species is extinct in the wild and reproductively extinct in cultivation. The plant shown here seems to have been the first collection made, in about 1905, and is still growing strong. 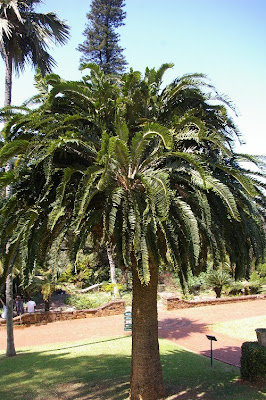 A selection of attractive plants is shown below, but two non-horticultural features deserve a particular mention. Firstly, the tea garden, a slightly ramshackle building staffed by volunteers who serve refreshments in aid of tuberculosis (and now usually concurrently HIV+) patients in Natal, a stalwart service. Although I didn't partake of them, the cream scones being consumed at an adjacent table  looked magnificent. Secondly, the lake, which is home to an assortment of 'exotic' but native waterbirds, which could be watched for hours
(African Spoonbill, Sacred Ibis and Reed Cormorant to right). 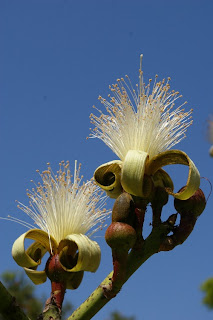 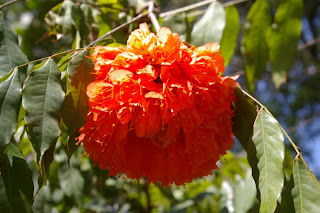 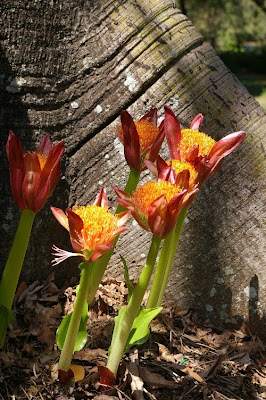 Scadoxus puniceus at the foot of a Ficus 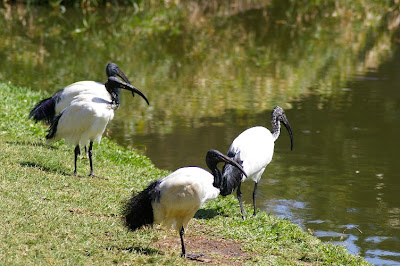