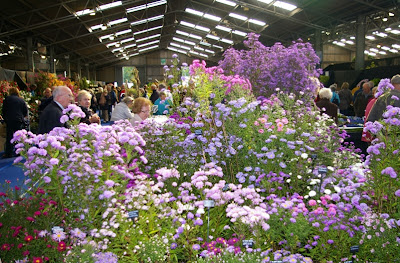 Michaelmas daisies shown by Old Court Nursery
The Three Counties Showground at Malvern, Worcestershire, hosts two horticultural shows each year. The first, in May, is a major event; the Autumn Show, on this weekend, is smaller and attracts less attention from the media. It is less exclusively horticultural, with poultry, rabbit and guinea pig shows, and displays of canines and other quadrupeds to divert attention from the plants - or the superabundant shopping opportunities. 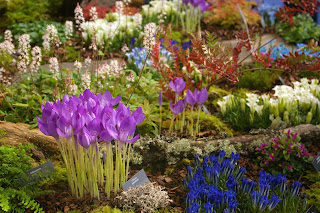 Crocus banaticus and Asian gentians on the Hartside Nursery stand

The RHS Show, consisting of nursery displays and sales tables, was held this year in the large display sheds at the southern end of the showground. While spacious enough for the smaller number of nurseries attending, they're not really suitable for the purpose,  being poorly lit, and the whole thing seemed rather pushed off into a corner: it didn't have the 'buzz' of most big shows. Nevertheless, there were some attractive displays to be seen, reminding us of the abundance of good plants for the autumn garden. I liked this combination of Kniphofia 'Toffee Nosed' and Orlaya grandiflora on Chris Cooke's stand, and elsewhere an attractive pairing was Miscanthus 'Malepartus' and Verbena bonariensis. 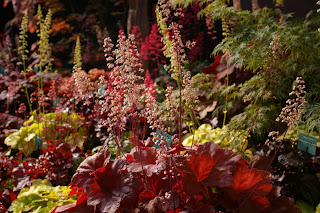 The show held in the Harvest Pavilion﻿ is more of a classic flower and produce show, held under the auspices of the Three Counties Agricultural Society and the Midlands Vegetable Society. The giant vegetables attract most attention, as well they might, for their sheer improbability and the skill needed to produce them, but the majority of the produce on display is  more normally proportioned (and looks much more appetizing).
The first prize for the display of giant vegetables (above right) was won by A. Jones, and the trug (below) by A. Young. 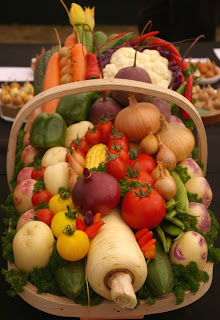 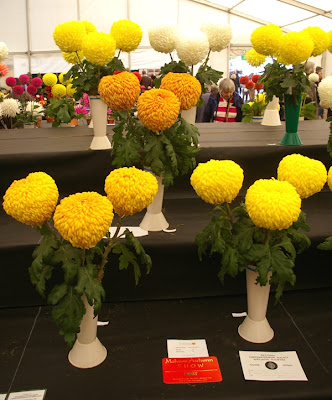 A noteworthy success was achieved in the Chrysanthemum show by Colesbourne resident George Proverbs, who won ﻿first prizes for all five classes he entered, including for this entry of five vases of three stems. To produce such top-quality blooms is a huge challenge, requiring meticulous attention through the growing season, including the protection of the developing flower head in an inflated paper bag.
﻿ 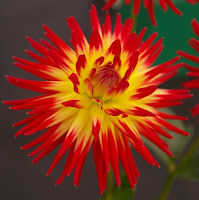 There are classes for all sorts of flowers, ranging from alpines to roses, and of course dahlias. Although many of those exhibited are too large-flowered to be attractive in the garden, there are many smaller-flowered cultivars on display that offer the promise of being useful additions to the summer border; after admiring it for several years I really must acquire plants of 'Weston Spanish Dancer' (right) next spring.
Posted by John Grimshaw at 22:35