The two huge apples shown above were grown by my father, and with another pair formed part of his winning entry in the village flower show in early September. They are a cultivar called 'Bushey Grove', which was raised by a Mrs Good in Bushey Grove, Hertfordshire, and introduced in 1897. It is now a rare cultivar, but is maintained in a few collections. How it came to be in my parents' garden is an interesting story.

Prior to his retirement my father was a minister in Bushey and in his flock was an elderly couple, Peggy and Lionel Hamilton. Peggy (b. 1914) lived in the same house all her life, with her husband moving in when they married in 1935. When she was a very young girl her father planted a tree of 'Bushey Grove' in the garden - it was presumably a well-known local cultivar at that time: she grew up with it and it was cherished all her life. The huge fruits were an annual feature at the harvest festival.

In their later years Peggy and Lionel worried about what would happen to their tree; as well as its sentimental value they knew it was by then a rarity. They mentioned this to my father, who told the story to me. I made enquiries about getting it grafted and one very grey and wet day in 2004 went to Bushey and took scionwood from the tree. It was sent to Sarah Juniper, daughter of the apple expert Barry Juniper (one of my former tutors) and a specialist shoemaker - see her fascinating website here. Sarah used a couple of different rootstocks, and sent the newly grafted trees back by post. 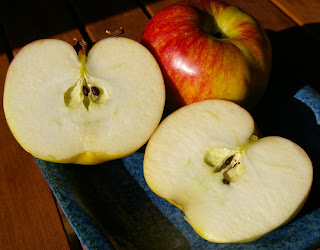 The Hamiltons celebrated their diamond wedding in 2005, shortly before Lionel's death: Peggy died in the following year. They knew the tree had been successfully propagated, and when large enough one of the young specimens was presented to Reveley Manor, part of the Bushey Museum and Heritage Centre to maintain the cultivar's presence in the area. It's not known what happened to the old tree after new owners moved into the house.

'Bushey Grove' is classified as a cooker: my mother says it makes excellent pulp. I found it to be on the pleasant side of bland when I tried it this afternoon, but I think the fruits are past their peak. They're very waxy, and very aromatic, which is always a nice feature in an apple, and with their size and rich colouring they're extremely decorative. These two weighed  708 g (25 oz).
Posted by John Grimshaw at 19:23