A few photographs from our Christmas visit to my parents, taken between courses...
This plant has been in the ground for very nearly 20 years and in that time has never shown any blemish attributable to cold - a genuinely hardy plant in this location. From one small plant it has built up into quite a mound of large rosettes, but no longer sends out long stolons producing offsets at some distance from the parent.

Echium boissieri is a native of southern Spain and is the largest hardy Echium I have encountered. It makes a large prostrate rosette in its first year, and produces an inflorescence to at least 150 cm in the following year, then dies. The flowers are creamy pink and not particularly showy, but the inflorescence as a whole is strikingly architectural both in flower and later - this one was almost flat now, hence the strange angle, looking down the main axis to small basal branches.

Another long-term survivor in my parents' garden is the common Myrtle, Myrtus communis, which produces heavy crops of berries every year.

This clone of Wisteria sinensis was bought as an unselected seedling from a local garden centre and has proved to be a lucky find. Not only does it flower freely along the lengths of the whips of last year's growth, but it is very fertile, and reliably produces heavy crops of fruit. The pods persist for much of the winter, looking extremely decorative, before eventually dehiscing explosively in spring. 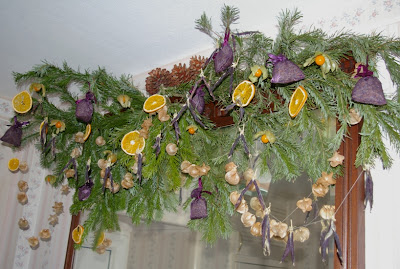 My mother's hall decorations this year include Cape Gooseberries (Physalis peruviana), the fruits of Nicandra physaloides with their inflated calyces, and dried husks from the pods of purple peas (the peas were eaten in due season).
Posted by John Grimshaw at 20:45