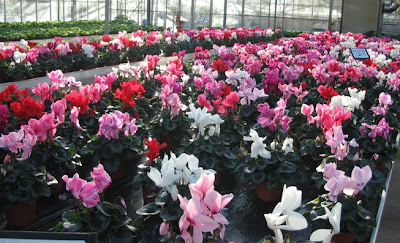 We are very lucky that not far from here, at Shurdington on the outskirts of Cheltenham, are The Dawn Nurseries, a family-owned traditional nursery producing flowering potplants. In spring they supply us with pelargoniums and other bedding and tub plants: at this time of year they are offering their winter specialities, cyclamen and poinsettias (as well as doing a roaring trade in Christmas trees and associated evergreens). It is a pleasure to see really well-grown plants that are properly cared for - look at the spacing of the cyclamen on the tables in the picture above, for example. They are placed to allow ample room for air circulation between the plants, thus reducing the risk of botrytis in their centres. The plants are offered at prices that are only slightly higher than those charged by supermarkets for a far inferior product. For some weeks I've been scowling at poinsettias in our regular supermarket that claim to be guaranteed for so many weeks, yet have clearly been chilled and are already dropping their leaves. 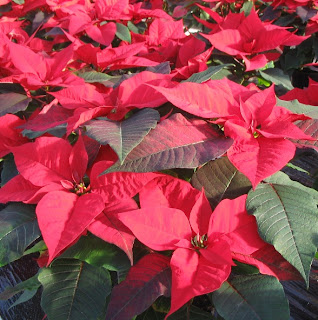 It is a very curious fact that, despite being apparently a very long-established part of the Christmas tradition, poinsettias only started to become widely known in the 1920s. They were first vigorously promoted by Paul Ecke, a Californian nurseryman, who grew them as an outdoors, open-ground crop, on a large spread just north of San Diego, and his son Paul Ecke Jr, who brought them into the greenhouse, until they became an essential feature of the All-American Christmas, and the rest of the world followed suit. The Ecke Ranch, now under the management of Paul Ecke III, continues to lead the way in poinsettia breeding and cultivation, as may be seen from their catalogue. Their plants are sold across the world, being shipped as cuttings from their production nursery in Guatemala, for growers (such as The Dawn Nurseries) to produce into finished plants according to the strict growing schedules provided.
Having had some dealings with Ecke Ranch and Paul Ecke III while I worked at Sahin I've paid more attention to poinsettias than might otherwise have been the case. The name itself is interesting, commemorating Joel Roberts Poinsett (1779-1851). He is decribed by Wikipedia as 'a physician, botanist and American statesman' - his life story is well-worth reading. He became involved with Euphorbia pulcherrima during his appointment as the United States' Minister (i.e. Ambasador) to Mexico, when in 1828 he found it growing in the area around Taxco del Alarcon. There it was known as Flor de Noche Buena (Christmas Eve flower) and valued for its winter-flowering (it is stimulated into flowering by the onset of short nights, which enables easy manipulaion of greenhouse-grown plants). Poinsett sent specimens home to his estate in South Carolina, and from there they became distributed into the nursery trade, being sold under the name poinsettia from 1836, if not before. It is a far cry from the wild type, which can be quite a large, straggly bush, to the clones now ofered by Ecke Ranch, with their improved branching, programmable production and a plethora of colours and shapes in the bracts, but there is something wonderful about an old-fashioned poinsettia  flaunting its scarlet heads, often on almost leafless stems, against the blue of a tropical sky. 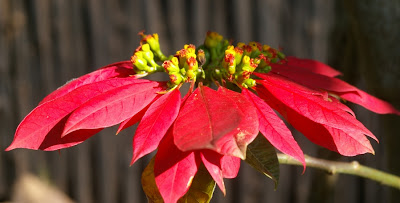 Euphorbia pulcherrima at Kiambethu, Kenya, November 2009. The typical flowers of a Euphorbia are borne in the middle of the ring of brightly-coloured bracts
Posted by John Grimshaw at 20:05