An African Begonia and a tragedy in Cambridge 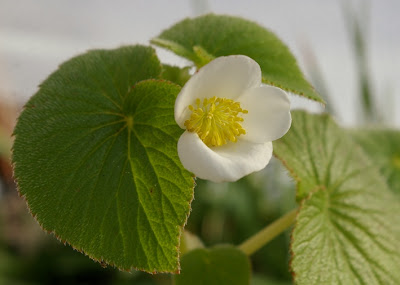 This is Begonia wollastonii (syn. B. keniensis), a species with quite a wide range in the montane forests of East Africa, growing in damp places near streams, although I've never seen it in the wild personally. This plant came from Cally Gardens, and originated in the Ruwenzori mountains of western Uganda. It needs no special care, growing in normal compost in a pot and going more or less dormant in winter - usually (this is a belated bloom that caught my eye in the greenhouse today). It produces bulbils from nodes on the stems so is easily multiplied. It may not be the most striking of begonias, but the epithet wollastonii conveys a lot of interest.

Alexander (Sandy) Wollaston (1875-1930) trained as a surgeon, but he was seriously afflicted by wanderlust, with a passion for natural history. His first major expedition was in 1905, as a member of the British Museum Expedition to Ruwenzori, fulfilling the roles of doctor, botanist and entomologist. It was on this trip that he collected the type specimen of this Begonia, but he is better known in the Ruwenzori for Lobelia wollastonii, one of the East African giant species and often seen looming large through the mist in pictures from Ruwenzori - also known as the Mountains of the Moon.

Between 1910-1913 he took part in two natural history expeditions to New Guinea and again added greatly to our knowledge of that island's biodiversity: he is commemorated there by Rhododendron wollastonii and Gentiana wollastonii. The First World War took him back to East Africa, where he served in what is now Tanzania, but was then Deutsch Ost-Afrika, in the long hard campaign against von Lettow-Vorbeck and his Schutztruppe. When life returned to normal he was off again, this time on the first British reconnaissance expedition to Mt Everest, led by General Bruce and with George Mallory as one of the climbers. His discoveries in the Himalaya may be epitomized by Primula wollastonii, whose wonderfully fragrant bluish-purple bells I remember very well from short turf in the Khumbu Valley above Namche Bazar in Nepal. In total fifty plants were named in his honour and bear the epithet wollastonii, though some may since have been reduced to synonymy.

In 1920 he was elected to a fellowship at King's College, Cambridge, aparently at the instigation of the economist John Maynard Keynes, who was College Bursar. He had minimal qualifications, but he said that  'they wanted someone used to dealing with savages' - which endeared him to the undergraduates, by whom he was regarded as someone they could confide in. This Cambridge post gave him a secure and comfortable niche in the world, enabling to put down roots, get married and start a family.

After surviving the trials of serious expeditions in Africa, New Guinea and Tibet, not to mention the war, his end was to come, violently, in his own study at Kings. An unbalanced undergraduate, one Potts, who was wanted by the police for various misdemeanours, met him in the street by chance, and they went to Wollaston's rooms to talk. While doing so a policeman arrived with an arrest warrant, but during the caution Potts pulled out a concealed gun. He shot and fatally injured the policeman but killed Wollaston outright; then turned the gun on himself.

This story is told in a charming, but desperately sad little memoir, My Father Sandy, by his son Nicholas Wollaston (Short Books, 2003), who was four at the time, and whose last memory of his father was of him eating quince jam with bread and butter.
Posted by John Grimshaw at 19:44