A third season of beauty

I've featured Paeonia 'Aurelia' three times in this diary this year: on 13 March for its emerging red shoots: on 18 April for its flowers and on 19 May I included a picture of a developing fruit. Now, after a dull patch for a couple of month,  it has metamorphosed into its final phase of beauty through the opening of the fruits to reveal a glowing mass of colour, set above foliage that is developing distinctly autumnal tints. The fruits are made up of three follicles, which split longituinally to reveal the fertile, shiny blue-black seeds surrounded by a mass of red 'bits.' These 'bits' are derived from ovules that were never fertilised and are often called, oxymoronically, 'sterile seeds', but they have a valuable function in attracting birds to the fruits to act as dispersers. Red and black is a classic attractant pattern, but they are usually combined in the same seed of fruiting unit (think Abrus precatorius or Taxus baccata). In peonies the two colours are separate but the effect is the same. People find the combination very attractive too! 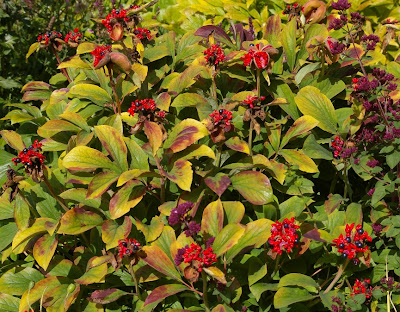 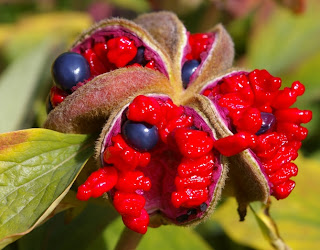