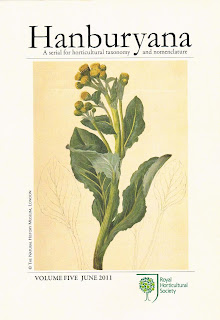 Hanburyana is the scientific journal produced by the Royal Horticultural Society, principally as a vehicle for taxonomic notes and records. My copy of this year's issue (no. 5) arrived today and I've read it through this afternoon. There are all sorts of interesting nuggets, as always, but among them are two important longer articles. For bulbous people, John David from Wisley discusses 'Nomenclature of intergeneric hybrids of Zephyranthes', unravelling a distinctly tangled tale in this group of New World amaryllids.
Secondly, James Cullen﻿ from Cambridge, a well-known Rhododendron expert, writes on 'Naturalised rhododendrons widespread in Great Britain and Ireland'. In this very interesting article he makes the case that the aggressively invasive plant ubiquitously known as "ponticum", is in fact a hybrid swarm involving R. ponticum (from scattered sites in Europe and western Asia), the eastern North American natives R. maximum and R. catawbiense, and the Western American R. macrophyllum, dating from hybridisation events in nurseries in the early nineteenth century. All the evidence suggests that true R. ponticum is not an easy plant to grow in Britain, being rather tender, so added hardiness from the very tough North American species was desirable. Other work has demonstrated, on DNA evidence, that the R. ponticum ancestors were all from Iberia, where the species grows in small areas of suitable habitat, unlike the much more expansive populations in north-eastern Turkey. The admixture of genetics has left its mark in the morphology of the plants, with features of the different species showing up to a variable extent in individual plants. As a consequence, Cullen has published the name Rhododendron × superponticum to cover all the plants belonging to this swarm. It will take a while to catch-on, no doubt, as everyone is so familiar with "ponticum'" as the name for this thug that is not only Britain's worst invasive plant but also a major host for Phytophthora ramorum.
﻿Hanburyana is published in hard copy in only limited numbers, but its full content is usually available online, though this issue has not yet been posted.
Posted by John Grimshaw at 22:45