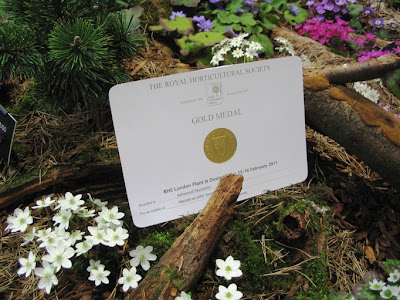 If there is an official start to the gardening year, it must be the Royal Horticultural Society's February Show, held in its halls in central London, whose first day was today. It's a rare opportunity, too, for the Society to feel like a society, when a concentration of its members comes together to talk about plants and gardening, and generally catch up after the show-less winter. It was good to see that the RHS had moved the 'design' element of the show to the Lindley (Old) Hall, leaving the Lawwrence (New) Hall to the nurseryman's stands and displays of plants. As usual with my compact camera the pictures are not as perfect as I'd like, but these images give some idea of the plants on show.
Two stood out, Avon Bulbs' elegant display of snowdrops and foliage plants designed by Alan Street, of which more anon, and the stand of hepaticas exhibited by Ashwood Nurseries. Both won gold medals, but that for Ashwood was a particularly noteworthy achievement - their fiftieth gold medal in unbroken succession. One wonders if this has ever been achieved before, but in modern times it is unique, and the Ashwood team deserves the heartiest of congratulations. John Massey's collection of Hepatica species and cultivars (see my post here) was the foundation of the display, complemented by the typical Ashwood touch of perfectly flowered small specimens of Prunus incisa 'Kojo-no-mai'. I gather from John that a good deal of careful manipulation of the plants was needed to achieve this perfection; some were in a cool store while others were brought on in warmth, but one can only imagine the devotion required (and the angst involved) to bring so many of these ephemeral flowers to such a state of perfection.