The BBC website is currently featuring a piece on the cold weather in December, in which various chilly statistics are supplied: that it was the coldest December in the past 100 years; the second coldest in central England since 1659; the average temperature across the country for the month was -1oC; it was the third sunniest and driest December on record (the sun was evidently elsewhere, certainly not here). The journalists and readers of such erudite literature as the Daily Mail seize on such statistics as proof that global warming is not happening, but another statistic provided is that 2010 was, globally, the second warmest since 1979. The difference between weather and the climate seems to be difficult for some people to grasp.

Gardeners are inevitably interested in the weather, but without making records it is remarkable how quickly one forgets what climatic conditions occurred when. I measure the rainfall as diligently as I can, and given the time to do so by prolonged rain today, I took the opportunity to tot-up the 2010 total. It confirmed what the river is clearly saying, that rainfall in the past year has been very low. Here are the figures recorded from the rain gauge on my lawn for the past four and a half years: 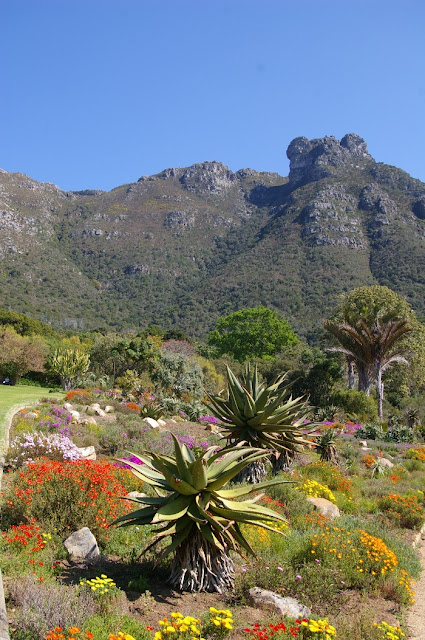 A gratuitous but warming view of succulents at Kirstenbosch, September 2010
﻿
Posted by John Grimshaw at 22:24