The weather this week has been mild and wet and progress in the garden has been dramatic. Snowdrop shoots are spearing up and different cultivars are opening by the day. That is good to see, but I was also pleased to see today that there is a smattering of flowers on two lemon-yellow selections of Eranthis hyemalis. Despite their different orifgins - 'Lightning' was found in Pennsylvania while 'Zitronenfalter' is from Germany - it is remarkable that the should both flower early in the season, long before any other Eranthis is visible. They're really more or less indistinguishable in appearance, but there is a gene for double flowers in the 'Lightning' strain, so it's probably worth keeping them apart. 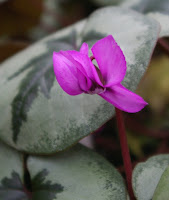 The first Cyclamen coum flowers have also opened this week, bringing a few sparks of colour here and there. It is funny to get excited about a few odd flowers when in a few weeks there will be sheets of them, but after the prolonged frost and snow any flower is welcome - and perhaps a posy of winter flowers is more delightful than a bouquet in summer.
Posted by John Grimshaw at 18:19