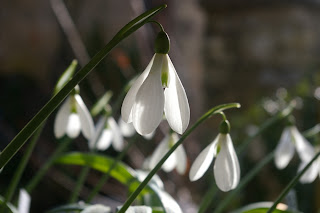 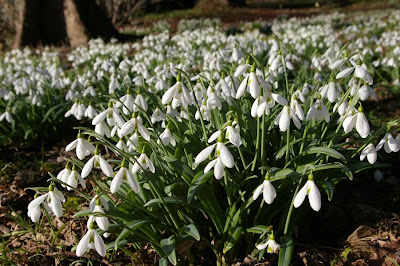 After the long period of cold, grey weather during December and January the snowdrop season is now really getting going. But it is still running late, possibly still as much as a fortnightnbehind what we have come to expect as the norm in recent years. This is evidenced by the fact that some of the early snowdrops are still in excellent condition when in previous years they would have been waning or even over. One of the most conspicuous of these is Galanthus plicatus 'Colossus', one of the flagship snowdrops of Colesbourne Park.

'Colossus' well deserves its name, being one of the largest and most vigorous snowdrops around - the unkind might even call it coarse. In full flower it belies such negation by being proportionate in leaf and flower, but as the flowers fade and the foliage develops to full size (about 30 cm long and 3-4 cm wide)it becomes less than petite. Indeed there is some justification in regarding it as the first foliage plant to emerge in the year. This vigorous growth results in (and proceeds from) a very large bulb that can be up to 5 cm in diameter. Freely offsetting, a clump builds up very quickly - division (when dormant!) is desirable every few years.

The flowers are of typical G. plicatus proportions, though larger than average at over 3 cm long. The inner segments have only a simple apical mark, a tidy arrowhead shape. The first are usually open by Christmas - as they were in 2009 - and can be finished by the end of January, though this year most had not opened before the snow came in early January and thus remain in good condition now. This early-flowering makes it a very useful plant, providing a big snowdrop early in the season, long before most have started.

Although it was discovered by Carolyn Elwes on the 'Byzantinus Bank' at Colesbourne, in the early 1980s, 'Colossus' appears to be a representative of G. plicatus subsp. plicatus, which grows nearby in some quantity. Both subspecies are remnants of the garden developed by Henry John Elwes and have naturalized successfully over the past hundred years or so. Athough intermediates occur, subsp. plicatus and subsp. byzantinus are generally recognisable. The latter has shorter leaves and a more rounded flower than the long-leaved, droopy-flowered subsp. plicatus, has two distinct markings on the inner segments, and tends to form masses of seedlings rather than dense clumps of clonally reproducing bulbs. I have never seen seed on 'Colossus' and wonder if it is perhaps a triploid clone, which might also explain its increased vigour.
Posted by John Grimshaw at 09:15