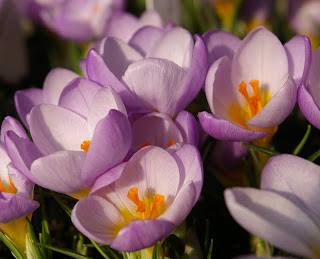 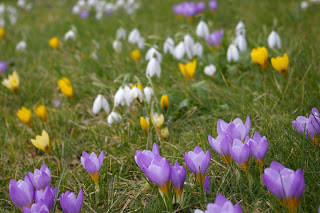 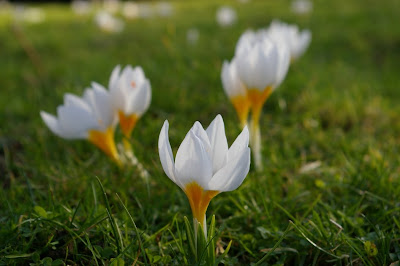 Today has been the first day of the year on which the sun has shone brightly and warmly enough for the crocuses to open, despite having dawned to a thin covering of snow. The opening of crocuses is in fact said to be related to a change in temperature rather than the actual temperature achieved, so the modest gain of two or three degrees was actually sufficient to bring the flowers open. As with all the early flowering plants this year the crocuses are running late, so it was the earliest of the commoner spring-flowered species, Crocus sieberi, that was looking at its best today.

As traditionally understood (i.e. in the sense of Brian Mathew's famous monograph from 1982, The Crocus) Crocus sieberi is a complex of at least four subspecies, of which subsp. sieberi comes from Crete and the others from mainland Greece, although I suspect that this will be challenged in Janis Ruksans' upcoming monograph.

The two cultivars looking good today are of horticultural origin, although they show many characters of subsp. atticus (C. atticus), and are of huge garden value. 'Bowles's White', with pure white perianth segments above a rich orange throat, was raised by the Crocus King, E.A. Bowles himself. As he wrote in his Handbook of Crocus and Colchicum (1952) 'In 1923 I found two pure white youngsters among my seedlings, after thirty years of hopeful expectation. The better of these has increased freely and is the best white and orange spring Crocus that I know. It is now known as 'Bowles's White''. He goes on to say that the contrast between 'its pure white perianth with the orange throat and scarlet stigmata' is 'wonderfully fine'.

The other cultivar looking good today is 'Firefly', a soft lilac in colour, also with the species' characteristic golden throat. I have not been able to trace its origin, but it was presumably selected for its great flower size, vigour and rapid multiplication. Both look beautiful coming up through short grass - 'Bowles's White' always earlier by some days - and a sure sign of the coming of spring. Visible in the second picture of 'Firefly' are a number of Crocus chrysanthus selections and hybrids, and Galanthus ikariae naturalised on a bank at Colesbourne Park.
Posted by John Grimshaw at 21:37