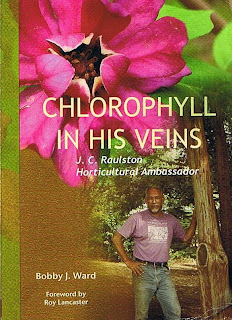 One of the more regrettable of J.C's failings is that that he did not publish more. Although he wrote copiously for the Arboretum newsletter, he published only one book, and not very many horticultural articles. In small part this dearth of publications is remedied by the printing here of transcripts of a few of his many presentations to horticultural groups. Despite being only a tiny sample they give an impression of what a talk by this man was like - full of wisdom, wit and irreverence. Mainstream American horticulture and its dullard practitioners get short-shrift in his talk 'The joys of horticultural deviance', while 'Untangling the hardiness question' reveals both the depth of his knowledge and his skill at passing this on to an audience. It would have been nice to have met him, but Bobby Ward's book is the next best thing.
Posted by John Grimshaw at 12:10