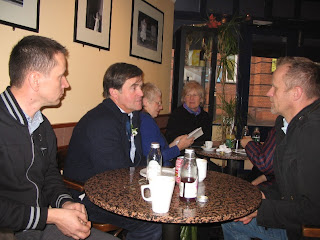 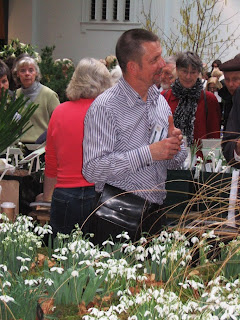 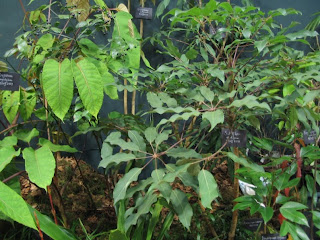 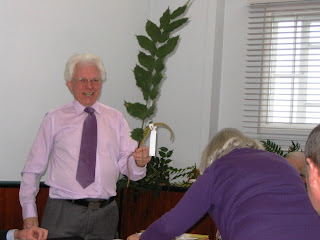 The February RHS Show in the halls at Vincent Square and Greycoat Street is one of the horticultural highlights of the year for me and many others, who emerge from hibernation to enjoy the first flower show of the year. Some might even go so far as to say that the plants are irrelevant, the greater pleasure being found in meeting up with old friends from far-flung parts of the country. Lunch at Joes's cafe in Horseferry Road is de rigeur. (Visible in the picture are (from L-R) Jorg Lebsa, Joe Sharman, Rosy Steele, Diane Rowe, part of Margaret Owen, Colin Rogers.)

It used to be that, going up the steps into the New Hall (I know, officially now called the Lawrence Hall, but indelibly in the minds of show regulars it is the New Hall)one was greeted by the sight and scent of the early spring bulbs on the nurserymen's stands. For the past two years, however, we have been confronted by a facade purporting to be a row of houses, around which some mediocre gardens have been 'designed' and flung together. That none of them this year was awarded more than a Silver Medal tells its own story - it is time for this monstrosity to be quietly retired and for the show to be restored to its raison d'etre, the display of plants at the peak of perfection.

The great attraction in February is of course snowdrops and there were some lovely displays in the Old Hall, where their scent was as powerful and lovely as ever. Pride of place was taken by the large circular stand of Avon Bulbs, designed and put together by Alan Street, who won his umpteenth Gold Medal with it - an unsullied display of perfectly grown snowdrops that nobody came close to matching. Not far away was a smaller than usual, but also gold winning stand by Ashwood Nurseries, featuring their cyclamen, hepaticas and hellebores as beautifully as ever. In the New Hall a fascinating stand of all sorts of rare woody plants (plus some herbaceous material) was put up by Bleddyn and Sue Wynn-Jones of Crug Farm Plants, featuring many of their collections of Schefflera and other Araliaceae. They are unparalled as plant collectors in contemporary Britain.

The morning was taken up for me by a meeting of the Woody Plant committee which, once the busines was taken care of, was principally a study session on Mahonia led by Roy Lancaster. Material had been brought from arboreta and private collections; Nick Macer and I made a contribution from Gloucestershire. The diversity of sizes and shapes of foliage in this fascinating genus was amazing and we could have spent all day - or more - going through the specimens more thoroughly. Even so, it was a revelation, and demonstrated the horticultural potential still to be explored in the genus. The picture shows Roy brandishing a single leaf of M. mairei.
Posted by John Grimshaw at 18:48